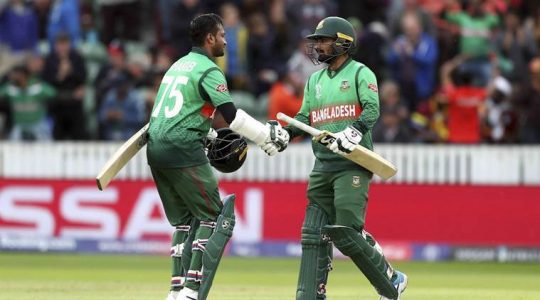 Bangladesh and Afghanistan will clash at the Rose Bowl; Southampton in what will be a crucial match for Bangladesh on 24 June 2019. The game will not have much significance for Afghanistan.

AFG wins the toss and decide to bat first

However, it will give the Mortaza led Bangladesh team a fighting chance of making it to the semi-finals. The Bangladesh team had mixed success in the ICC World Cup 2019.

The lost most of the matches by a thin margin, and it could have gone in any way. The Bangladesh team has defeated both South Africa and West Indies.

GTV and Maasranga & BTV will beam the Match live in Bangladesh. www.rabbitholebd.com and Rabbithole app will live stream the game for the fans in Bangladesh.

Shakib Ul Hassan will be the Key

The Key to the strategy of the Bangladesh team will be Shakib Ul Hassan who is the second most prolific run scorer in this World Cup with 425 runs from five matches.

On the other hand, Afghanistan has nothing to lose after going down against India by 11 runs. They, however, were able to deliver the fright of the life to the Indians who had almost given up the Match for lost had it not been for Mohammad Shami’s heroics.

On Thursday, Bangladesh was outplayed by Australia who had posted a massive 381 runs target which the Tigers could not reach. However, there were plenty of occasions for the Bangladeshi fans to cheer up including a ton by Mushfiqur Rahim which was his seventh in ODI.

Afghanistan has become the first team to be eliminated from the tournament, and they have nothing to lose. However they can play spoilsport to Bangladesh fortunes in this World Cup, and if they can beat the Tigers, it will mean the end of their quest in this World Cup.