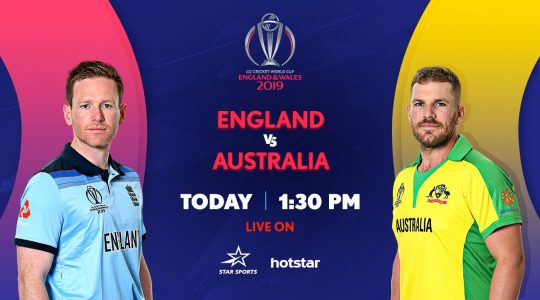 Arch rivals England and Australia will face off against each other in an epic battle of the ICC Cricket World Cup 2019 on Tuesday, June 25, 2019. The match will be played at the iconic Lord’s cricket ground in London.

England wins the toss and decides to bowl first

With Jason Roy out of this crucial match, England would be struggling with their opening combination. James Vince will open the innings with Johnny Bairstow but Vince isn’t the perfect replacement for the in-form Roy. Other than this, England could make one more change. Liam Plunkett, who isn’t really in top form could be dropped for this match. The fact that Tom Curran has a great record against Australia doesn’t help Plunkett’s chances. Other than this, no other changes can be expected in the lineup.

Australia likely to be unchanged

Australia looks a much stronger side when they have Marcus Stoinis in the lower-middle order as the all-rounder. This is just what happened in their previous clash against Bangladesh. Nathan Coulter-Nile is likely to keep his spot in the XI courtesy of an improved bowling performance in the previous match. Nathan Lyon could get a chance ahead of Adam Zampa, but the possibility is quite low.

With a lot of rain ahead of the clash in London, the matchday might be a bit overcast. Rain is not expected but the ball with a swing around a bit with rain on the eve of the match. Batting could get easier as the day progresses and the pitch loses its moisture.