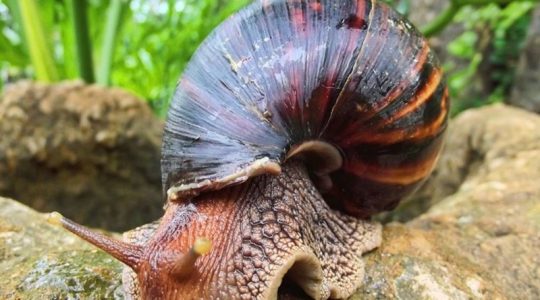 Giant African Snails turned up in the luggage of a Nigerian traveler this week. The US Customs and Border Protection Unit discovered them along with illegal veggies after the sniffer dogs alerted officers, Daily Mail UK reported. Possibly, the lawbreaker planned to eat the snails as they make for a popular dish in Africa. However, the snails are never risk-free to eat.

Occasionally, Giant African Snails turn up far from home. The giant slimy creatures are the largest of their species and are not native to the USA. A few years ago, the prolific breeders brought concern in Texas as they carry parasites that can cause meningitis. The parasite comes from the “rat lungworm,” and snails love to eat their poop.

It’s best not to even touch the gross animals. The Atlantic cited “Autumn Smith-Herron, director of the Institute for the Study of Invasive Species at Sam Houston State University.” Around the Houston area, she grew concerned about people picking up “the 8-inch gastropods.” She noted, “Unfortunately, humans are picking the snails up…they carry a parasitic disease that can cause a lot of harm to humans and sometimes even death.”

The idea of cooking and eating the giant slimeballs probably grosses out most people. However, in Nigeria, locals go crazy for them. WLRN Miami spoke to ‘Nigerian-born chef Margaret Lanier [who] co-owns Sheri’s Restaurant in Opa-locka. Sheri’s is an African restaurant serving mainly Nigerian dishes.” That was back in 2014 when snails started appearing in Florida.

According to her, the snails make a very tasty meal and she gets quite excited about them. However, she noted some stringent rules. And, even if anyone did follow them, there’s always a risk of getting very sick and even dying. She said, that people need to wash the snails with a combination of salt, lemon, and alum. However, it’s not necessarily safe, so don’t even try it.

It’s not worth the risk as snails also need purging

To really clean a snail they should be fed on very clean and disease free food, then thoroughly purged so their insides empty. It takes a lot of fuss and hassle. Even then, there still might be residual parasites. However, in Africa, poor people probably have other things to worry about. If you were starving perhaps it might be worth risking eating Giant African Snails.

(DISCLAIMER) We take no responsibility if anyone reads this and tries to eat the snails.

What do you think about the Nigerian smuggling two Giant African Snails into the USA along with accompanying veggies? Do think it’s worth the risk of getting meningitis from the animals? Sound off your thoughts in the comments below about Giant African Snails