By Aishwarya Ramaning
253 Views
Posted In
Health
Tagged as
Related

Cow Hugging becoming a new health Trend in Dutch, with changes bought forward and more concern been shown to our Mother Cow, bought a slight reduction in cruelty by granting more love and affection to her. As the studies show, cow hugging also helps humans, and the cows possess self-healing humble qualities.

In India, we call the cow our Mother. By worshiping her and granting her an eternal love, which is now being observed in Holland and different parts of the world.

According to BBC News, 2007, research shows. People in the West are moderately taking to hugging the cow’s for hours as a healing therapy for several sicknesses. Particularly during the distress period during the COVID-19 pandemic. 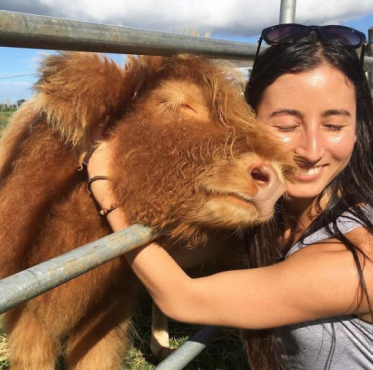 A self-care trend that translates from Dutch “Koe Knuffelen“ for cow hugging is now a new wellness trend that claims to provide positivity and calmness to people, which began more than a decade ago. During the COVID-19 pandemic, cow embrace has apparently become a health moment in healing people, calming their nerves and bodies, reducing anxiety.

The BBC also reports that. Visitors are arriving at cow farms from Rotterdam and Switzerland to the United States. Some cow farms are even charging up to $75 per hour. The trend involved huggers lean against a cow to rest, stoke, embrace, snuggle, or talk to the animal for hours. The cow’s warmer temperature and slow heartbeat play a keen role in spreading positivity and lessening anxiety in people. The activity heightens oxytocin, a hormone released during convivial bonding, of human beings and bovines.

The new trend of relaxation is for real say’s, a Bengaluru-based psychiatrist Dr. B Girish Chandra “cows by nature are calm, gentle, and patient. As proved by Applied Animal Behaviour Science. Humans who engaged during the sessions encountered a lower heart rate and remained relaxed posterior the process. This research also noted a positive impression on humans. One must transpire an interest toward a change like human–bovines synergies”.

< Previous Article
Hereabouts Some Amazing Times To Drink Water
Next Article >
‘COVID-19’ to remain with us for over the next 10 years, says ‘Ugur Sahin’ CEO of BioNTech
About the Author
Aishwarya Ramaning