Former World Number One in Chess, Viswanathan Anand admitted that he will be under pressure when he takes on current Number One Magnus Carlsen at the Zurich Chess Challenge. 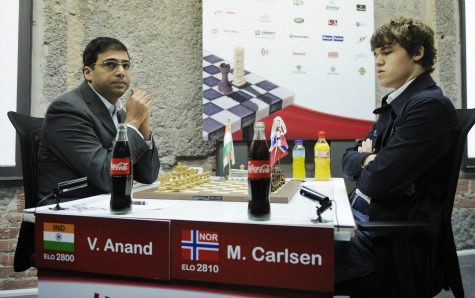 The Zurich Chess Challenge (ZCC) commencing on Wednesday Jan 29, 2014 at the Hotel Savoy features six of the best of the chess world.

The average rating of the participants is 2801 and the winner of the championship will enter the record books for winning the strongest tournament in chess history.

Anand said that 4 out of the 6 played in the just-concluded Tata Steel event held in Wijk aan Zee. Anand praised the winner of the event Aronian that it was a very impressive run.

The Zurich Challenge is a brainchild of Russian magnate Oleg Skvortsov who is an amateur chess player. All the six contestants will play against each other once in classical and then with the colors reversed in rapid round.

A win in rapid will score only half the points of a win in classical.

Ten Sports Cricket Live Streaming Online: India vs Zimbabwe 1st T20 score
About Manoj Nair 117 Articles
For Manoj, writing has been his first hobby, and after completing his domestic duties, he has plunged into his first love, writing. He is associated with writing for different news sites, like Blasting News, PanAsiabiz, and Herbal Remedy Sites like MamaHerb.com and AOR.