Located about 28 million light-years from Earth in galaxy M51, it’s thousands of times farther away than all the other exoplanets detected in our Milky Way.

For the first time, a galaxy has been found outside the Milky Way Galaxy. This study of Chandra scientists proved that the universe is a thousand times farther away than our galaxy.

🪐Chandra scientists have found the first possible planet candidate outside of our galaxy! Located about 28 million light years from Earth in galaxy M51, it's thousands of times farther away than all the other exoplanets detected in our Milky Way. More: https://t.co/LLnJAzfDZA pic.twitter.com/oa3u4GL3Av

According to the Chandra X-ray Observatory, this new discovery is based on some transits. Here, the passage of a planet in front of a star blocks the star’s light and makes a characteristic dip in brightness of the star, which can easily be detected with the help of telescopes. With these characteristic dips, scientists can tell the size of the planet, its proximity to its Sun, etc. Scientists have used this technique to find thousands of exoplanets.

Until now, every exoplanet or possible exoplanet found has been in our own Milky Way galaxy, which means that these exoplanets are at a distance less than 3,000-light-years from the earth. The exoplanets which the scientists found in our neighboring galaxy known as Messier 51 (M51) or the Whirlpool galaxy, due to its shape, would be around 28-million light-years away. 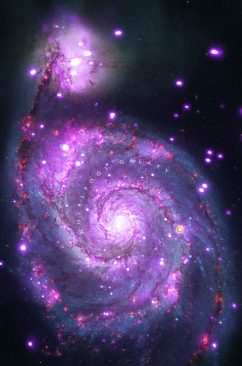 These objects generally contain a neutron star which pulls in gas from a closely orbiting companion star. Astronomers wonder if there a planet exists, then it should have a tumultuous history and a violent past. Therefore, this planet would have had to survive the supernova explosion that created the black hole.

They further speculate that at some point after the supernova explosion, the companion star could also explode just like the supernova and blast this planet once again with an extremely high level of radiation.

About this binary system

Astronomers and scientists say that this binary system contains a black hole that orbits a companion star, which is about 20 times larger than that of the Sun. NASA said that the X-ray transit that they found using the Chandra data lasted for about three hours. During this, the X-ray emission decreased to zero. Based on this information, the researchers estimate that the exoplanet in the M51 galaxy would be around the size of the planet Saturn.

Now Eggs can be unboiled! Check out How

How to use the Coviself, a home test kit for COVID-19

Good News: Covaxin gets WHO approval for emergency use listing

COVID Cases Drop, Economies Reopen, CO2 Emissions Surge
About Priyanka Pandey 94 Articles
Priyanka Pandey is a woman of words who believes the pen is mightier than the sword. She wants to bring a change in her surroundings using the power of words. She is a bold content writer who wants to follow her passion for writing and get her works published under a renowned publishing firm's name. The current news topics, especially those related to politics, are her favorite.