At the end of the third days play, Pakistan score was 38/0 in their second innings taking a lead of 189 runs with 10 wickets remaining.

In all probabilities Pakistan are likely to win the first Test. 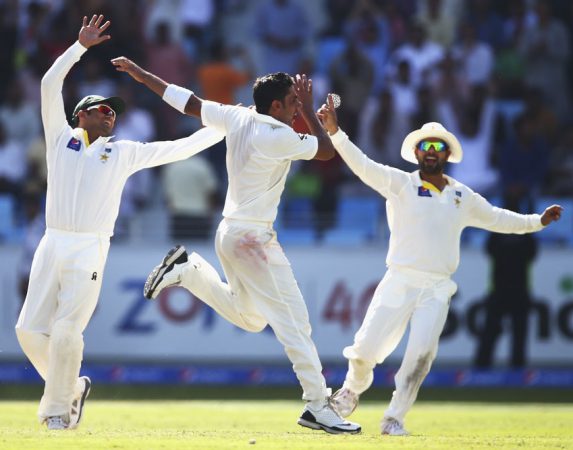 Australian openers David Warner and Chris Rogers stepped up their game to provide a perfect response to the
Pakistan innings as day two ended with 113 written on the scoreboard for the Kangaroos without a wicket loss.

Earlier, Pakistan carried the momentum from day 1 to end their innings with a total of 454 after ten wickets fell.

After scoring 219 runs with the loss of four wickets on day one, Pakistan steered the innings steadily with Misbah Ul-Haq and Asad Shafiq. Follow the Pak vs Aus live score here.

Steven Smith did the trick for Aussies by clinching the wicket of the Pakistan skipper. However, Aussies could barely impress on the dusty pitch as in-form wicket keeper batsman Sarfraz Ahmad took charge.

His quick paced innings shifted the scene for Pakistan innings as he went on to score his maiden century. Meanwhile, Asad Shafiq fell on the verge of his ton as he was caught by Marsh off O’Keefe’s delivery.

PTV Sports will be telecasting the match live in Pakistan while Ten Sports will beam the Test live in India and other countries in Asia.

PTV Sports will also be live streaming the series for viewers in Pakistan at its website here .

The Australians didn’t take much of a time to wipe out the tail end as the Pak innings finished at 454.
Leading the charge for Aussies was David Warner, who picked the most from a rather unimpressive Pak bowling attack hit by the absence of Saeed Ajmal.

Pakistan have retained the same squad for the second Test against Australia.

His 79 run knock came from 84 deliveries and was given good defensive support by Chris Rogers at the other end. The openers would be keen to build on the solid start when they get on to the pitch for the third day today at Dubai International Stadium.

Pakistan vs Sri Lanka 2nd Test Dubai: PTV Sports live cricket streaming info and score
About Sanjeev Ramachandran 147 Articles
Sanjeev Ramachandran has found ultimate joy all through his 23-year-long journalism career by writing for national and international newspapers, websites and blogs. From technology to politics to sports to entertainment, he has been able to express ideas and pen opinion pieces on whatever triggers his interest. Currently at the helm of his own content and public relations company, called Siyahi – The Content & PR People, he makes sure that he doesn’t always let administrative tasks take over his writing space.