A thriller of an encounter is on the cards when Chennaiyin FC visit the Jawaharlal Nehru Stadium for a face off Delhi Dynamos.

Chennaiyin has already built a reputation with their perfect record so far. Six points off the first two matches have led them to be seated among the pole positions. 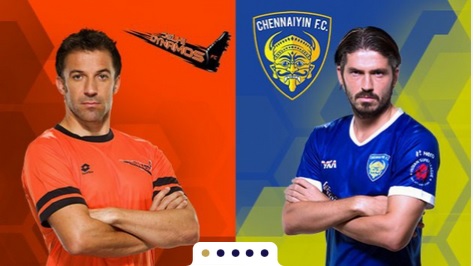 Balwant Singh earned the reputation being the first Indian to score in the ISL and has lived up to expectations by guiding Chennai through the tables.

Providing the right balance would be Stiven Mendoza.
Meanwhile, Materazzi looks adamant of stepping up the momentum and much depends on the defensive line for that to happen.

They have proved the backbone for Chennaiyin throughout the series with the likes of Bernard Mendy and Denson Devdas doing the needful. Follow the live scores here.

On the other side, Delhi Dynamos have gained little to brag about so far in the competition. Del Piero did provide some wonderful moments, but he would have to step up his game to clinch the two points from this match.

Though undefeated, Delhi Dynamos are still in search of their maiden victory.
Mads Junker and Pavel Elias had found the right side of the net in their previous outings, but still is in search for consistency in bringing up the fine touch.

The ISL can be watched live on Star Sports TV channel starting from 7:00 p.m. onwards. Star Sports will also be live streaming the match at its official website here.

Delhi boss Harm van Veldhoven can also be expected to bring the amendment in the formation to hold the opposition counter, which he has acknowledged as threatening.

When the two teams get on to the field this evening, fans would have something big to expect. While Chennayin FC will look for a hands down win, Delhi Dynamos will be on their quest to find the elusive victory out there.