The World Chess Championship match between Norway’s Magnus Carlson and India’s Vishwanathan Anand has begun in Sochi, Russia, and the opening ceremony of this grand event was conducted with its full glory and elegance at the Congress Hall of the Radisson Blu hotel in Sochi on Friday. 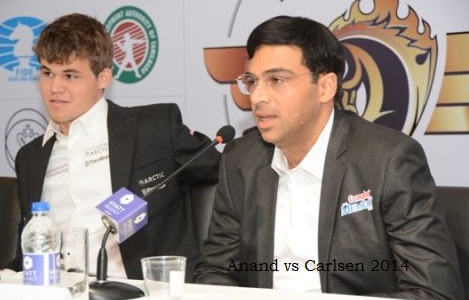 The World Championship will witness 12 games between Vishwanathan Anand and Magnus Carlson with the Classical Time Control.

The Game 1 will begin at 5.30 PM IST, and it will be telecasted live in the official website of FIDE World Chess Championship. So stay tuned and witness the brain blowing game.

This auspicious ceremony was blessed with the presence of some eminent personalities from the world of politics and chess.

FIDE President Kirsan Ilyumzhinov was undoubtedly the most reputed figure in the event, and some other noted dignitaries include, Andrey Filatov (Russian Chess Federation President) and Igor Levitin (Advisor to Vladimir Putin, the Russian President).

During the event, Igor Levitin read out the welcome letter from the first citizen of Russia, Vladimir Putin. Putin expressed his happiness of holding this mega championship in his country.

Through his letter, he conveyed his aspirations about the event, and he expect that this event will take place in the highest standard.

The ending part of the opening ceremony was simply spectacular. Singer Tina Kuznetsova and Jazz Quartet of People’s Artist of Russia Igor Butman took the audience to a new world of entertainment through their mind blowing performance, and this added the heat of the event to a great extend.

Born in Easter Europe more than four decades ago, Marian has been a journalist half of his life. Recently moved to Dubai where he's employed in The Media Marketing Inc offices, Marian adds his experience to a very young team of writers and not only reports on events, but also forms new journalists. In love with all things Middle-East from food to culture and way of life, Marian is the person who we always count on to save the day. His other passions include laying in the sun on any island in the Indian Ocean or enjoying a fresh seafood meal. But he would leave all these in order to get that amazing reportage ... and that's why he's seen as a guru in our newsroom.