Latest Bollywood news this year is King Khan and Salman Khan, both the superstars plant kiss on the forehead of Salman’s sister Arpita during her sangeet ceremony.

Her wedding reception is to take place in a lavish palace in Hyderabad on Nov 18, 2014.

It is learnt from reliable sources that Shah Rukh Khan said that Arpita is like his sister and he will be attending the marriage ceremony of Arpita even if he is not invited.

Shah Rukh also said that he had cradled Arpita in his arms when she was young and now how can he be absent in Arpita’s marriage?

Arpita is going to get married on November 18, 2014 with the love of her life Aayush Sharma, who is a Delhi-based beau. The ceremony is going to take place at the Royal Falaknuma Palace in Hyderabad.

On the “Sangeet” ceremony, many Bollywood stars attended to bless the couple.

Shah Rukh was invited officially by Salman and both of them showered blessings to the soon-to-be-bride Arpita. Bollywood Baadshah Shahrukh kept his promise and attended the ‘’Sangeet’’ ceremony of Arpita at Salman’s Galaxy Residence. 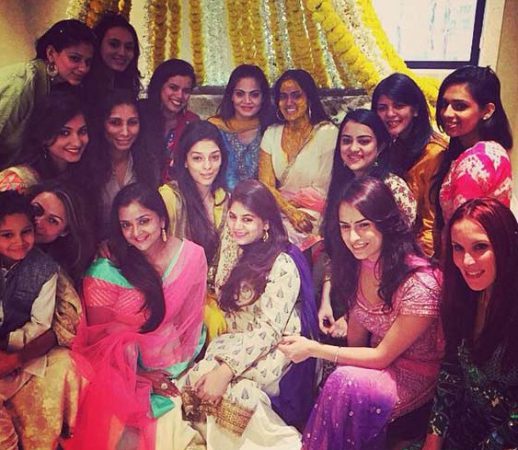 It was learnt few years back that Salman and Shah Rukh were good friends until they had a tiff in Katrina Kaif’s birthday party, who was the then girlfriend of Salman Khan.

Let’s see how a sister’s love can bring the two super stars together. Can we watch more movies like “Karan Arjun” by the duo again in the coming days?