Back to Back losses against Argentina and Germany have shattered the morale of the Indian Hockey Team who is playing in the Champions Trophy, 2014, and when they enter the ground for the match against Netherlands, they expect nothing less than a scintillating win. 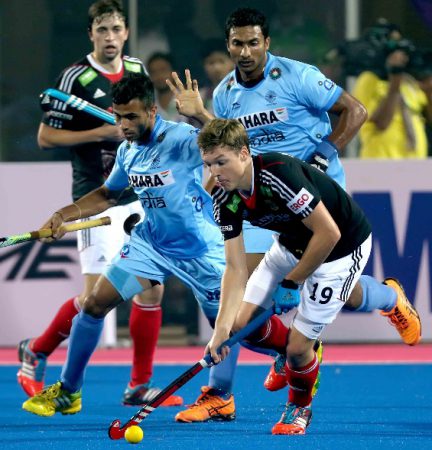 The match against Netherlands will not be easy for the hosts, as the team from Europe is the Silver Medalist in World Cup Hockey.

India lost their first match against Germany in a very narrow margin. Indian Goal Keeper Sreejesh showed some impeccable performance in that match, and the hosts lost the battle in a margin of 1-0.

But in the second match, Argentina literally tore down India into shreds. The Latin American team defeated India in a score of 4-2, and this pulled India to a very dangerous position in the tournament. Follow the Ind vs Holland live scores here.

“The mistakes which we did yesterday will be rectified today. And we have planned to put up a very good show, our best show which we can put up tomorrow. We are also prepared mentally for the quarter final, and we hope we will get it without much hassles.

“We are all prepared for that and no matter who is our opponent”, said India’s most experienced drag-flicker VR Raghunath to the reporters.

Star Sports and Sky Sports are telecasting the match in India and New Zealand respectively.

The match will be live streamed in the official website of Ten Sports here.

India’s attacking is still considered to be one of the bests in the World, but the main headache lies in the defense. On the other hand, Netherlands is a well balanced side, and they have the capability to defeat any team in the world without sweating much.

MI vs SRH: Star Sports live streaming IPL today’s match with highlights
About Manoj Nair 117 Articles
For Manoj, writing has been his first hobby, and after completing his domestic duties, he has plunged into his first love, writing. He is associated with writing for different news sites, like Blasting News, PanAsiabiz, and Herbal Remedy Sites like MamaHerb.com and AOR.