Australia have set things moving ahead for the future in the Common Wealth Bank Test series by defeating India in the first test  by 48 runs. Australian spinner Nathan Lyon stole the show with his amazing spell that brought the visiting Indian batsmen to their knees. 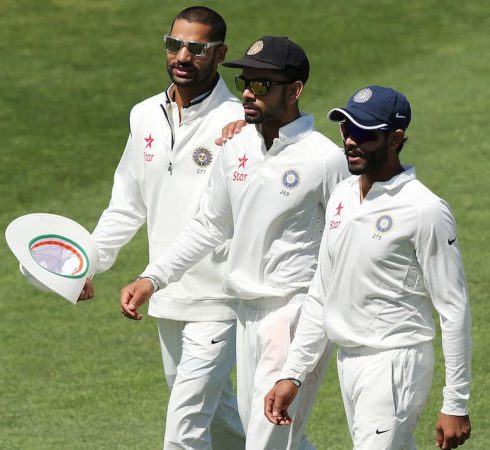 Michael Clarke declared the Australian innings at the point where they ended play yesterday. The script looked entirely different during the first two sessions, during which India steadily paced towards the target of 364.

Despite early wicket losses of Shikhar Dhawan and Cheteshwar Pujara, the Indian innings was steered smoothly by Virat Kohli and Murali Vijay.

But things took a U-turn after the dismissal of Murali Vijay at 99, which took place shortly after Kohli reached his ton, he being only the second player to score two centuries on captaincy debut.

Despite desperate efforts from the skipper on one end, wickets kept tumbling down as Nathan Lyon sent the Indian line-up back to the pavilion, one after the other in quick succession. Watch the highlights video here.

The final result was given an apparent certainty when Kohli (141) also walked back to the pavilion, after throwing his wicket away to a Lyon delivery. The right-arm spinner ended his spell with a 7-wicket haul, taking his total tally in the match to 12 wickets.

A total of eight wickets fell in the last session, and that finally ended the Indian score to 315 – 48 short of the target. It didn’t give much of a thought for match officials to gift the Man of the Match Award to Nathan Lyon.

Australia now leads the 4 match series 1-0 and will be swinging on to Brisbane for the second test match on 17th in full momentum. Watch the match highlights here.