India who aimed for a mammoth score in the first innings of the 2nd Test against Australia failed to carry forward the rhythm in the second day, and got all out in a score of 408. 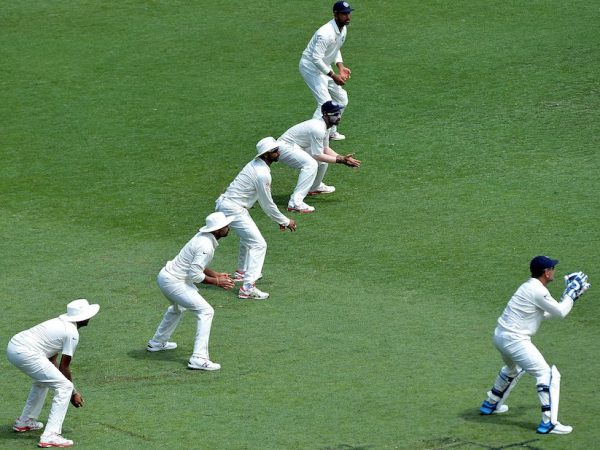 The visitors who begin their second day with a score of 311/4 failed to add at least a 100 runs to the total. As per latest updates, Australia has scored 47 runs with the loss of one wickets in their first innings.

All the Indian batsmen threw away their wickets in a very irresponsible manner, and this was the major reason behind the unexpected collapse.

Both Rohit Sharma and Mahendra Singh Dhoni showed glimpses of form in the initial phase of their innings, but they failed to take their individual scores beyond thirties.

Hazlewood dismissed Rohit and Dhoni in a score of 33 and 35 respectively.

The surprise package in the first half of the second day was Ravichandran Ashwin who scored 35 runs with 6 scintillating boundaries.

For the Australian bowlers, J Hazlewood put up an impressive performance, and he picked 5 wickets by conceding just 68 runs. Nathan Lyon took three wickets, whereas Shane Watson and Mitchell Marsh picked one wicket each.

Chris Rogers and Shane Watson are batting for Australia now, after the early dismissal of David Warner. The left handed batsman who is in top form was dismissed after scoring a quick 29 with six boundaries.

Visit the official website of Star Sports to watch the live streaming of this match. Australian cricket lovers can watch the match from Sky Sports 3 HD, Sky Sports 2 HD and Fox Sports.

Star Sports is telecasting the match in India.

The highlights videos can be watched here.

< Previous Article
Xiaomi to resume sales in India after sanctions from court
Next Article >
Check Ibps.in for IBPS PO exam results 2014
About the Author
Padmaja Shalgar