Bollywood actress Soha Ali Khan tied the knot with actor Kunal Khemu in a low-key private ceremony on January 25, 2015 in Mumbai with close friends and family members in attendance.

Seen at the event were brother and sister-in-law Saif Ali Khan and Kareena Kapoor respectively, who were playing hosts and posed for the media with the couple. 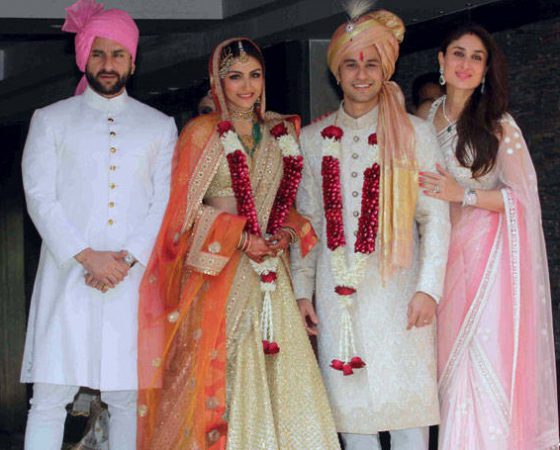 Yesteryear actress and mother Sharmila Tagore was also seen at the ceremony along with Soha’s sister Saba Ali Khan.

Soha was seen wearing a cream and orange bridal attire, while designer Manish Malhotra designed clothes for Kareena, who looked ravishing in the champagne-pink saree.

Saif was seen wearing an Achkan, showing off his perfect Nawab side. 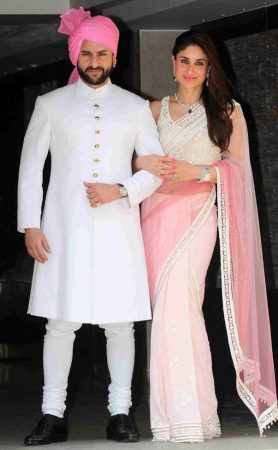 Strangely, Amrita Singh- Saif’s ex-wife- was not spotted, and also missing from the events was daughter Sara.

Later in the evening, a special reception was held, and among the attendants were Karisma Kapoor, and Amrita Arora.

Soha started off her celebrations with a special bachelorette party, which was attended by actresses Konkona Sen Sharma, Neha Dhupia and other friends.

Following the same, a Mehendi function was completed, where the pretty bride opted for an outfit by Ritu Kumar.

Soha and Kunal have been dating each other for many years and have been in a live-in relationship for more than four years now.

Sharmila Tagore presented a plush apartment to the couple some time back in Mumbai and the duo had moved in their new pad. 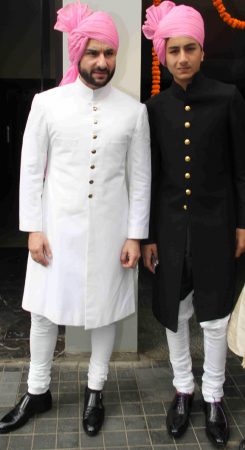 Soha had expressed her joy when Kunal proposed her last year and had posted on Twitter on the same.

“It gives me great happiness to share with you all that Kunal proposed to me in Paris with the most perfect ring in the world and I said ‘yes’,” she wrote.

Here’s wishing the best to the newlywed couple!