Colombo: August 14, 2015: At the end of second day play of Galle Test, India lead by 192 runs, in reply Sri Lanka scored five runs for the loss of two wickets.

Kohli and Dhawan both added another milestone to their career, by scoring centuries, which helped the Indian team to dominate Sri Lanka.

Wriddhiman Saha who scored his maiden Test fifty was the last batsmen after Dhawan and Kohli, to score a half century, while other batsmen failed to stay on the field for long time. 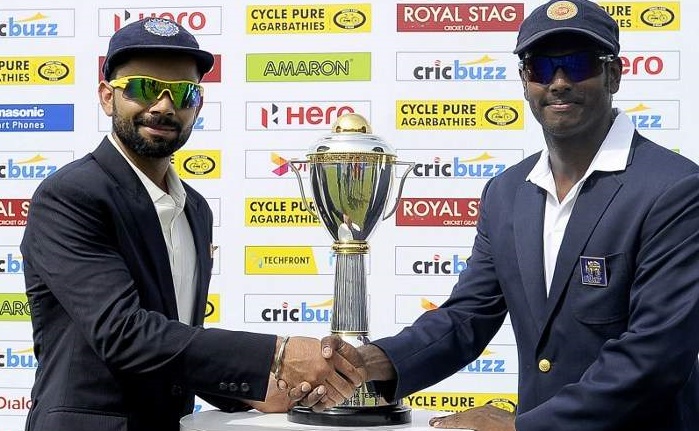 For Sri Lanka, T Kaushal took five wickets by giving 134 runs in his 32.4 overs, Nuwan Pradeep took three wickets for 98 runs in his 26 overs, Dhamika Prasad and Angelo Mathew took one wicket each.

In the second innings, Sri Lanka lost two early wickets at the score of just five runs, after which the days play was ended.

With 8 wickets remaining, Sri Lanka trail by 187 runs. Though the commentators predict that the pitch will still get low, and the batsmen will find it easy to bat on.

Catch all the action live on Doordarshan and Sony Six TV channels if you are in India. The live streaming can also be watched at the official websites of Sony Six here or HERE.

Angelo Mathews captaincy may be tested at this point of the game, and the viewers would like to see how the Lankan team will respond to the score, with still three days of play left in the Test.

As the track is helping the spinners Kohli will be more dependent on his spinners, and have an attacking field for the Lankan batsmen.

Ashwin got the break through by getting FDM Karunaratne for 0 and the next wicket was taken by Amit Mishra who bowled a beautiful googly and dismissed Jk Silva for a duck.