Are John Abraham and Priya Runchal heading for a split?

Has the fairytale marriage reached its nadir and hit rock bottom? It is the most trending story today in the gossip columns. It has been a year since the talk started that everything is not ok between the hunk and his America settled wife.

Friends of the couple say the long distance marriage is putting a severe strain on the relationship. For the last one year, John’s marriage has been dissected no end by the gossip world. 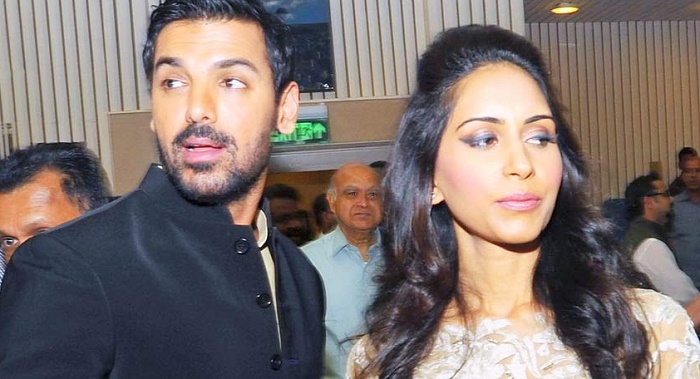 There are fresh reports that the couple is heading for an eventual split. They have been hardly able to spend time together. Abraham is very busy with his films and the latest release of his action flick, Dhishoom.

Wife Priya, who is an investment banker in the US, also has her job commitments to fulfill which make it even harder to plan a rendezvous together. The distance and long communication gap have been blamed for the marriage hitting choppy waters.

However, the actor has rubbished all these rumors and termed them the product of imagination. Talking to India Today, the handsome actor said that he does not feel like talking about this anymore. He is fed up giving clarifications to one and the sundry.

John is particularly angry because these rumors reach a crescendo whenever a new film of his about to be released. Last year also, just before the release of Welcome Back, there were talks about his marriage hitting a rough patch. John had termed these rumors as baseless then also. The rumors were laid to rest when the couple was snapped together a few months after the eruption of these rumors.

This year has been particularly bad for the married actors and actress. Sushant Singh Rajput and Ankita Lokhande, Sikander Kher and Sonam Kapoor’s sister, Arbaaz Khan and Malaika Arora to name a few. Hope that Priya and John does not join this list. What do you think? Does the love fade with distance?

Was Jiah Khan murdered? Human flesh found in her nails

Ekta Kapoor to pull out of ‘Jodha Akbar’ show

Akshay Kumar Gets Fitter And Better As He Turns 48

Shilpa Shetty shares a cryptic post on her Instagram handle that says, ‘I made a mistake but it’s ok’
About Nitish shaw 60 Articles
An aspiring novelist and a random blogger, Nitish is also a porky-mouthed banter specialist when it comes to football (soccer), films, TV Series, History and socio-economic issues. He travels, indulges in music and plays outdoor sports to get his creative juices flowing. “There’s the scarlet thread of murder running through the colorless skein of life, and our duty is to unravel it, and isolate it, and expose every inch of it.”- Quote this, and you will be his favorite person for at least as long as the two of you can hold up the conversation.