By Nirmal Narayanan
1557 Views
Posted In
Science
Tagged as
Related

Increasing Global temperatures are not only affecting floating ice but are also massive grounded glaciers which have existed for thousands of years. Huge icebergs have been breaking off from the icy continent in frightening regularity. The latest has been a 71.5-square-mile iceberg which broke off last weekend has the scientific community worried. The massive iceberg follows another massive break follows 2,200-square-mile iceberg which broke off from the glacier in July from a location known as Pine Island.

The huge chunk of the ice which broke off from the floating edge of the Pine Island Glacier in West Antarctica on September 23rd is a part of the gargantuan West Antarctic Ice Sheet and if the ice sheet gets dislodged, it can raise the sea levels by 10 feet over a period of time. The Glacier restrains almost 10 percent of the West Antarctic Ice Sheet from going into the sea and this can be seen clearly in an image from the Sentinel-1 satellite which was posted by Stef Lhermitte, a remote sensing expert at the Delft University of Technology in the Netherlands. 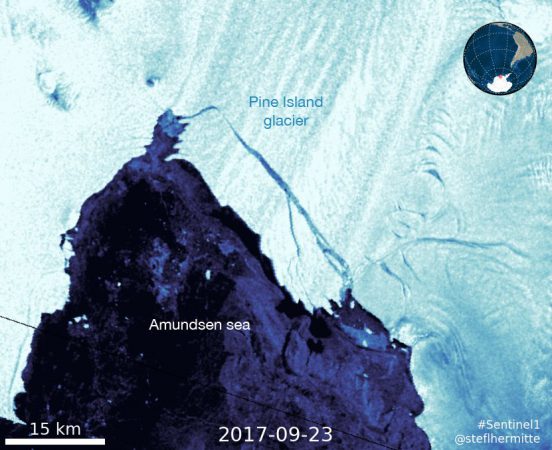 What is worrying scientists is the fact that the glacier which is restraining the ice sheet is getting loose and if it gives away, it will be the disaster in the making. Each year more than 40 billion tons of ice is being chiseled off due to global warming. This raises the world sea levels by 1 mm in 8 years.

The breaking of the ice sheet is happening inland than on the front where the warm ocean waters meet the ice sheet. A similar rift was formed in 2013 almost 20 miles inland. It moved for over two years and set a giant iceberg free into the ocean for nearly two weeks.

Something similar is also happening in Greenland where the water is seeping from below and melting ice. The rift in the middle indicates that warming ocean water is weakening the ice shelf deep inland.

In the future, we could see more and more icebergs merging with the sea raising sea levels and threatening coastal cities and island nations.

With US President Trump still in a denial mode about global warming dangers, the latest Pine Island Glacier iceberg breaks off is one more addition to the long list of proofs which point towards the impact of increasing global temperatures on the sea levels.

< Previous Article
Watch NASA video of a whole year on Earth spin a million miles away
Next Article >
Radishes can be grown in space now, according to a new NASA research
About the Author
Nirmal Narayanan