Indian Prime Minister Narendra Modi’s ‘Clean India’ challenge seems to have taken the country by the wave. The latest to join the bandwagon is tycoon Anil Ambani, who took the broom, urging the citizens to go the same way. 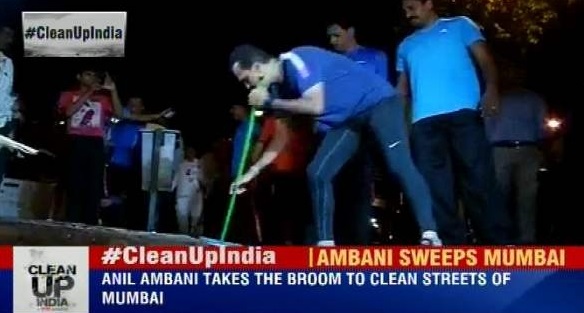 Cricketer Sachin Tendulkar accepted the challenge and posted pictures on Twitter, and it seemed Ambani, too, has caught into the new challenge.

A report on IBN said that Ambani was seen cleaning the Mumbai streets early in the day on Wednesday.

“This is my privilege and honor to be part of the PM Narendra Modi call to the nation swachh Bharat Abhiyan. Many of my friends in Bombay club are participating in the clean India mission,” he said while he nominated nine other names for the challenge, said the report on IBN.

PM Modi had urged people to nominate at least nine people, ensuring that the ‘Clean India’ movement goes viral. His challenge was accepted by most people he nominated, including Priyanka Chopra.