Wardrobe malfunctions are now becoming quite common among high flying celebrities, and the recent addition to this list is Kristen Stewart who faced an ‘Oops’ moment during the Hollywood Film Awards. 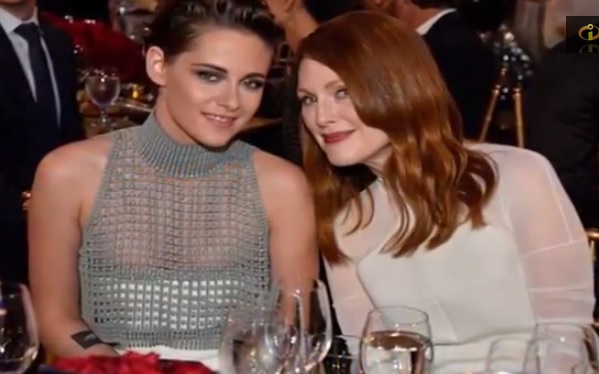 The ‘Twilight Saga’ actress suffered a very embarrassing nipple slip during the ceremony, and at the same time, her ex boy friend, Robert Pattinson was there in the audience.

It all happened when the Brunette entered the stage to present an award to Julianne Moore. Kristen Stewart was seen jovial while entering the stage, and she was dressed in a Chanel couture outfit.

Things turned adversely for the actress when the white cloth under the transparent couture slipped. This small slip unleashed her modesty and flashed her chest in front of the star studded crowd.

Kristen Stewart was totally unaware of the wardrobe malfunction during her time in stage, and she presented the award to Julianne Moore with her unique smile.

Robert Pattinson and Kristen Stewart were in an intimate relationship till the day Kristen was caught oon camera kissing Rupert Sanders.

Now, the scintillating young lady has triggered a relationship with Nicholas Hoult, her costar in ‘Equals’. On the other hand, Nicholas has dated Jennifer Lawrence for four years.

Robert Pattinson after his break up with Kristen is now dating with FKA Twigs, the renowned English singer. The actor was seen in a new hairstyle which looked normal from the front, and weird from the back.

With certain portions of the head shaved and unshaven, he introduced a new style to the fashion industry.