By Parasshuram Shalgar
3959 Views
Posted In
Science
Tagged as
Related

NASA recently released a video with commentary by Jay Herman, which reveals that a time-lapse is made of thousands of satellite images. The video shows an entire year on Earth from the point of view of a million miles.

The images captured from the satellite’s camera are primarily used by the scientists at the National Oceanic and Atmospheric Administration (NOAA) to study and keep track of changes happening to vegetation and cloud system on a daily basis. 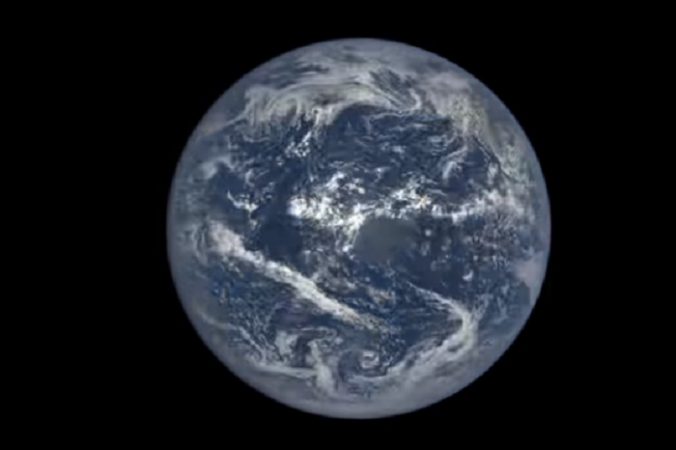 According to Jay Herman, EPIC lead scientist, the use of cloud cover enables researchers to discover the current temperature state of our planet. Hence, scientists should constantly monitor the changes in cloud patterns to study how warm and cool our planet is.

Running over 2 minutes and originally captured on July 6, 2015, the video with voice commentary by Jay Herman, shows the round globe like object, probably the Earth slowly rotating till around 21 seconds.

However, after 21 seconds, the object rotates fast and we spotted several places which are both white and brownish. We noticed the brown color in both light and dark variant when the Earth moves at 36 seconds.

One Year on Earth – Seen From 1 Million Miles:

You will be able to spot both Sunrise and Sunset at around 48 seconds. However, at 48 seconds, we noticed green dot like objects which encloses the Earth in circles. But the green circle vanishes within few seconds and the Earth rapidly rotates.

If you notice the video, you will be able to know that red, green and blue colors are combined when the video reaches one minute and 31 seconds. We noticed that the video slows down when it reaches close to 2 minutes.

The video of the Earth captured by NASA’s EPIC camera will be very helpful for researchers and scientists to analyze the nature of Earth including accurate assessment of temperatures.

Finally, the moon’s shadow passes over our planet, which signifies the fact that the moon itself is transitioning in front of the globe. During the next few years, the nature of Earth will change and this video will help you to keep track of the changes.