By Nitish shaw
5122 Views
Posted In
Mumbai
Tagged as
Related

The amchi Mumbaikar fondly calls Mumbai first garden under a flyover at King’s Circle as their ‘walker’s paradise.’ In June the Brihanmumbai Municipal Corporation (BMC) constructed the D Mehta Garden under the Tulpule Flyover.

This unique initiative was built at a figure of Rs 5 crore over the space of 700-metre. The locals wanted to create a place which would be free of vagrants or park vehicles. The garden not only have an ornamental plant surrounding the area but it includes a jogging track as well.

What is beautiful about the project is, it is designed to depict the flow of Narmada whereas the sitting arrangements look like ghats of the river. 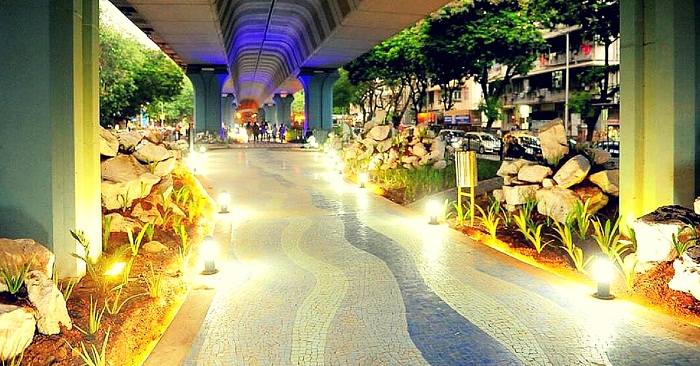 How did the entire initiative start?

The project got the go ahead four years back when the flyover was opened for the use of the public. The Mumbai Metropolitan Regional Development Authority has built three flyovers which included the Tulpule flyover as well. It came to the notice that each flyover had an area under it which could be used for a better cause.

It also came to the resident notice that the field below the flyover was either used for unauthorized parking or shopkeepers who were illegally operating shops there. The people who resided in areas nearby approached the municipal commissioner Sitaram Kunte to take some action at the earliest.

The Municipal Commissioner then took this matter to the garden department to ask if there was a possibility of a garden there. Soon tenders started flowing, and now this area is a place where Mumbaikars get there own space in a crowded city

But the good thing about the entire initiative is no one single handily takes the credit for the project. The civic body believes it was only possible because of the resident residing in the area who cooperated with them to make this project a reality.

But the question will be seeing more project in the future?

That for now, remains impossible as no other flyovers in Mumbai have areas where a garden can be built. All the other flyovers have a very limited area that is used for people who uses it for crossing.

Well, this is not the first of its kind initiative, a similar concept is adopted in Bengaluru where there is an area under the Metro corridor which is used as a flea market every first weekend of the month.

This kind of concept can also be seen in London, Tokyo, New York, etc. The areas under the flyover are used for building shopping complex, cafes, etc.

But what remains to be seen is when will Delhi turns its crowded areas under the flyover into parks and green belts?