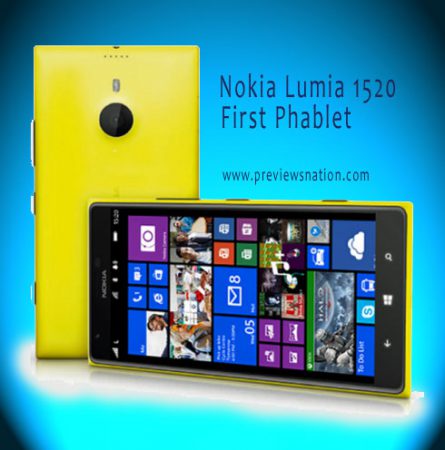 The most notable difference in the screen is an additional third column in the Live Tile home screen, aimed at devices with bigger screens of 5-inches with 1,920×1080 pixels resolution. It is equipped with Qualcomm’s latest Snapdragon 800 processor, 2.2GHz, coupled with 2GB of RAM.

Users of Lumia 1520 can close apps by using the X button which pops up in the multi-tasking window. Also available is the new Driving mode that uses Bluetooth to determine if user is driving.

The handset makes use of a micro-SIM card for 2G, 3G and 4G LTE. The ClearBlack Display helps in cutting down reading glare in direct sunlight.

The handset measures 162.8×85.4×8.7mm, looks slimmer and definitely seems lighter in weight with 209g. The device comes in a range of colours, including glossy red, matte white, matte black and yellow.

The device comes with Wi-Fi 802.11 a/b/g/n , DLNA and Wi-Fi hotspot support. Lumia comes with internal memory of 32 GB which is expandable by another 32GB via a microSD card slot.

The new Nokia Camera app with onscreen controls helps in controlling exposure levels. The 3400mAh battery is non-removable and gives a stand-by battery time of 780 hours and up to 25 hours of talk time.

The official launch price has been set at $749 (Rs 46,190), one of Nokia’s most expensive offerings to the market.

< Previous Article
Meet Google’s three new robots: Cheetah, WildCat and BigDog
Next Article >
Here is the reason why Alok Nath is trending on Twitter
About the Author
Sanjeev Ramachandran