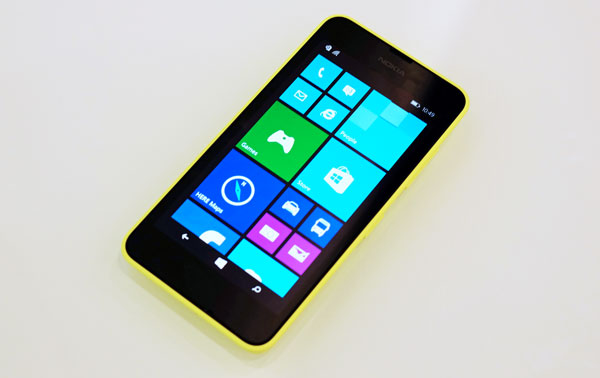 The first thing you notice in Lumia 630 is the faster access to settings, much in line with Android. Of course, there’s also Cortana, the voice-activated PA, and a notifications centre.

Nokia, strangely, doesn’t surprise with model designs, and Lumia 630 is as same as you would expect, completely in plastic. The cover can be swapped for five different colors (yellow, white, green, black or orange).

The edges have been tapered for the needs, and display of 4.5 inches is decent. With a weight of 134g, Lumia 630 looks and feels great, if not the best in class.

The 4.5 inch screen comes with a resolution of 480 x 854 (ppi =218), which is just right for the price, although there are options in Android like the Moto E that seems quite pleasing. The display works better for the brighter interface of Windows Phone 8.1.

Nokia Lumia 630 is powered by quad-core Qualcomm Snapdragon 400 processor clocking at 1.2GHz. One actuallt expected better from the 512MB of RAM, given that other models in similar range are offering the same.

For regular games and general needs of social networking, 630 is right. The Cortona is expected to be released later for many countries, including UK.

Again, much like other Android Devices, Nokia fails in the camera department and the 5MP camera is nothing but a disappointment. No front facing camera here, so selfies can be a issue for the current trend lovers.

On the whole, Nokia Lumia 630 boasts of the updated Windows Phone software and a decent display. The battery life is better than other models of the range. The camera is a spoilsport, but with customizable features and other things in place, you can bet on this one.

Google’s Android One Series Review: Budget, But Not Game Changing!

Google to take on Whatsapp with Its Own Mobile Messaging App
About Parasshuram Shalgar 170 Articles
A well-versed news editor for over 14 years now, Mr Shalgar’s articles have been circulated to well over 60+ million visitors.