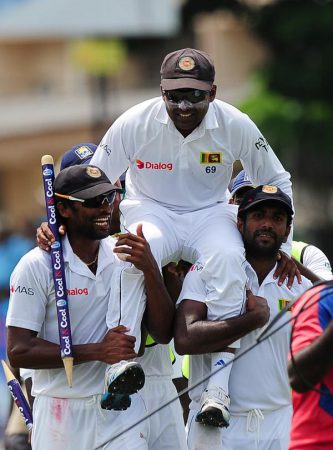 The former Sri Lankan captain ended his Test career after his team won the second Test by 105 runs against Pakistan. Earlier Pakistan was chasing 271 runs to win the test but were soon wrapped out for 165 in their second innings in the first session of the final day on Monday.

Mahela Jayawardene retired from Test cricket after Sri Lanka had a series sweep against Pakistan 2-0. The 37-year-old ended his 17-year Test career with 149-matches and 11,814 runs. He is one of the five batsmen in th world to top 11,000 runs in both Test and one-day cricket.

Rangana Herath completed a five-wicket haul in second innings. Herath took nine wickets in the first innings and five in second, finishing with 14-184 and surpassed his previous best match 12-157 against Bangladesh last year.

Jayawardene said that he will turn all his attention towards one-day cricket and hoped to be selected for his last World Cup tournament in Australia next year. He said that a “gut feeling” prompted him to quit Test cricket.

As soon as last batsman of Pakistan, Wahab Riaz was caught out by Kaushal Silva, Jayawardene was carried off on his teammates’ shoulders in the Sinhalese Sports Club stadium. It was a fitting farewell as he had shared a record 624 Test partnership with Kumar Sangakkara in 2006 at the same venue and amassed 2,921 Test runs at the stadium, which is the most runs by any batsman at a single ground.

Jayawardene has already retired from T20 format after Sri Lanka became world champions in April. He is now concentrating on one-day matches alone. He was also congratulated by Sri Lanka’s president after ending his Test career.