Efforts of the Indian Navy to boost self reliance has reached another milestone as INS Kamorta, the country’s first indigenous Anti-Submarine corvette hit the sea on Saturday.

An official statement said that INS Kamorta was commissioned on Saturday from the docks of Kolkata by Indian Defence Minister Arun Jaitley. 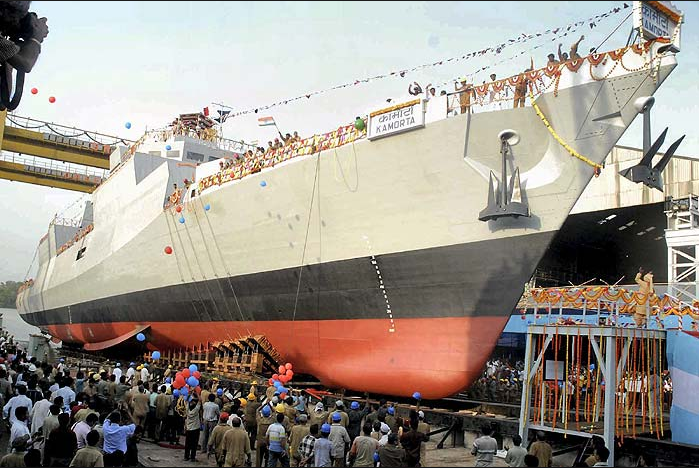 Speaking on the occasion, Jaitley said, “I am sure INS Kamorta will serve this country effectively for a very long time.”

“Our effective preparedness is always the best guarantee for peace in this region. Our armed forces have been effectively discharging that function,”

According to reports, the INS Kamorta being the first of the four indigenously built anti-submarine warfare corvette has been built by the Garden Reach Shipbuilders & Engineer (GRSE) of Kolkata with a design from the Directorate of Naval Design.

Launched back in 2010, the INS Kamorta has been waiting for the commissioning ever since its acquisition by the Indian Navy on 12th of July this year.

“Ninety percent of this ship is indigenous. Its steel is entirely indigenous. Its design and making has taken place at the Garden Reach Shipbuilders and Engineers in Kolkata, one of our foremost shipbuilding yards,” he said.

The ASW would also be carrying the Active Towed Array Decoy System (ATDS) and VLS launched Barak 1 SAM (Surface-to-Air Missiles) with the capability of hoarding an integral ASW helicopter.

Children And Students Rally In Coimbatore To Save Sparrows

Check Cgbse.net for Chhattisgarh Board Results 2016

2-DG safe against the COVID, price yet to be fixed

‘There Is No Link Between Prayers And Fighting’: Nitish Kumar
About Sanjeev Ramachandran 147 Articles
Sanjeev Ramachandran has found ultimate joy all through his 23-year-long journalism career by writing for national and international newspapers, websites and blogs. From technology to politics to sports to entertainment, he has been able to express ideas and pen opinion pieces on whatever triggers his interest. Currently at the helm of his own content and public relations company, called Siyahi – The Content & PR People, he makes sure that he doesn’t always let administrative tasks take over his writing space.