Jeff Bezos, the founder of Amazon, was in India for his second visit, where he was seen flashing and showing off a $2-billion cheque at a shopping mall in Bangalore on September 28, 2014. 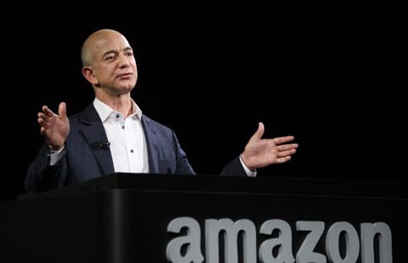 Bezos’ visit to India has been a fair entertaining game for Amazon India that received the huge sum as a part to trap the Indian customers. The company aims to become the ‘most customer-centric business’ in the world.

On Sunday, Jeff Bezos was seen carrying out a road show in the IT city, where he was on a supply truck and showed off the $2-billion cheque, reported a post on Zee News.

Earlier in July, Amazon had announced a total of Rs 12,000 crore (USD 2 billion) in the country to expand the business. The new investment follow a day after Flipkart, the major rival in the country for Amazon, announce USD 1 billion for the needs of expansion and funding.

Unlike Flipkart, which has been in India for long, Amazon started off its work later and opened the marketplace in the country last year. The company has seen amazing potential in the Indian economy, and also for the e-commerce sector.

The e-commerce space in India has heated up with coming of Amazon and Snapdeal, which are competing with Flipkart for a share in the segment.

Both Amazon and Flipkart are offering same day delivery for customers, and the visit of Jeff Bezos and new investment will only toughen the competition.

A report on DNA talked of the press statement, where Bezos was quoted “After our first year in business, the response from customers and small and medium-sized businesses in India has far surpassed our expectations.

We see huge potential in the Indian economy and for the growth of e-commerce in India. With this additional investment of $2 billion, our team can continue to think big, innovate, and raise the bar for customers in India.”

6.2 crores raised by Rubix Data Science to be used in reducing financial risks

Fisheries could benefit from biodiversity and conserve it, too

Is It Possible To Quickly Expand Your Company?

How To Ensure Your Business Runs Smoothly & Seamlessly