India won the toss, batted first and scored 267 runs for the loss of 7 wickets in the 2nd ODI against West Indies being played in Delhi.

After posting a convincing win in the opening ODI, West Indies seems to have stepped up the momentum to prove to be threat to the men in blue. 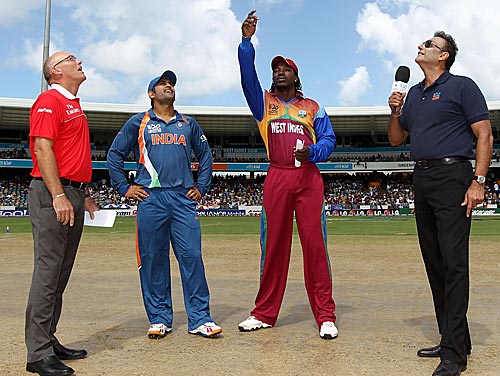 A display of consistency from the Caribbean lads can take the fight on to the Indian terrain when they face each other today at Feroz Shah Kotla stadium in Delhi.

A delightful season was on the cards before the series kicked off for Mahendra Singh Dhoni and his men. But things took a different turn when they got on the turf.

It would be the worries within the squad which captain cool may have to fight more rather than being concerned of the sprit with which the opposition squad will now come armed with.

With the primary concerns making the circle around the bowling department, shoddy performance from the Indian players between the 22 yards also raises concerns within the Indian squad.

Come to the core of the batting line-up and you have Virat Kohli running through the worst ever patch of his life.

Mammoth targets seem diminished only when he brings up his best, and Kohli’s skills had dived rock bottom when it came to the Kochi encounter.

Watch all the highlights videos here.

The bowling attack never looked subtle enough to keep the Caribbean fireworks under control. Dhoni would so have to make a gamble by bringing in Ishant Sharma for the second ODI in Delhi today.

On the other hand, you have the West Indies squad that looks to have undergone the perfect rejuvenation experience. They are responding the best ever way they can.

Everything was put under criticism for Dwayne Bravo and his men, but they built their character on the field to wash all rebuke down the drain. Numbing the spin attack of the Indians has been the winning point and if they are to reproduce the same, West Indies may end up with a smile yet again.

New Zealand turns it on over India in the 2nd Test

IPL 7 first few matches to be held in UAE

Controversial call helps Novak Djokovic win over Murray at Sony Open
About Sanjeev Ramachandran 147 Articles
Sanjeev Ramachandran has found ultimate joy all through his 23-year-long journalism career by writing for national and international newspapers, websites and blogs. From technology to politics to sports to entertainment, he has been able to express ideas and pen opinion pieces on whatever triggers his interest. Currently at the helm of his own content and public relations company, called Siyahi – The Content & PR People, he makes sure that he doesn’t always let administrative tasks take over his writing space.