By Anupam Jolly
1538 Views
Posted In
Entertainment
Tagged as
Related

It was reported that Lady Gaga, has once again defied animal rights activists by steeping out in another fur coat and hat on Wednesday night. 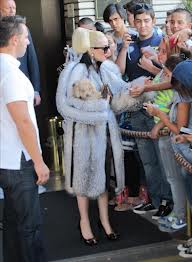 The “Born This Way” singer has led to calls to boycott her music for using fur. The 26-year-old pop singer wore her coat half off her shoulder and bared her stomach in a cropped top in an all black ensemble. She was joining a private Versace dinner in Waldorf Hotel in New York.

Gaga’s taste for fur was acceptable at the designer’s table, but everyone is not so accepting. Earlier this year, Gaga angered animal rights activists when she took to her blog to defend her use of fur.

Gaga, who is famous for her ‘meat’ dress said ‘I have truly always stayed away from skinned fur, especially as I have never been able to afford a nice one, but this does not mean my morals are rigid and that I won’t bend at the sight of an absolute art piece of a coat. I have no chains about this.’

Now she has made it clear that she does not care about her critics and she feels no need to stop wearing fur.

She even condemned the tactics of pressure group Peta. She said, in a dig at the charity that she does not support violent, abusive, and childish campaigns for any cause.