The 1st Test between Australia and India has begun at the Adelaide Oval on December 09, 2014. It was a real emotional morning in the ground, as the Australian team is playing a Test just 11 days after the demise of their batsman Phillip Hughes. 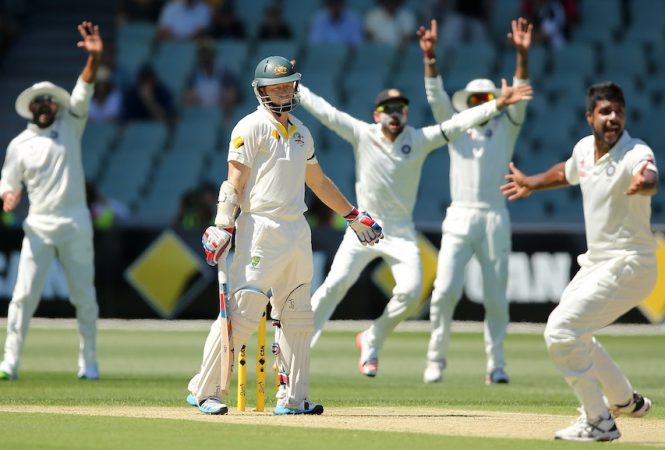 Micheal Clarke who won the toss elected to bat first, and as per recent update, the Kangaroos have scored 201 runs with the loss of two wickets. The hosts are building the innings in a quite fast paced manner, and they have reached their two hundred in just 41 over.

David Warner has completed his century, and he is batting with 113 runs. The macho man have scored these runs in just 116 balls, and he literally punished the Indian bowlers to all corners of the ground.

Warner is given adequate support by Skipper Micheal Clarke who is batting with 58 runs. The partnership between them is now 114 runs.

Virat Kohli is leading the Indian side in the absence of regular skipper M S Dhoni. The young gun is experimenting Karn Sharma in the place of R Ashwin. An injured Bhuvneswar Kumar is being replaced by Varun Aaron.

Indian bowlers literally failed to utilize the swing and pace offered by the Adelaide wicket. Ishant Sharma picked the 1st wicket of Chris Rogers when the score was 50.

Australia lost another wicket is quick time, when Shane Watson was ruled out in a Varun Aaron delivery. But from then, the Kangaroos showed their real class and quality, and they are now going well in the shoulders of Clarke and Warner.

The match is getting live telecast in Star Sports for viewers in India. Willow TV is telecasting the match in USA, whereas Sky Sports 3 HD, Sky Sports 2 HD and Fox Sports are doing the same in Australia.

You can watch the live streaming of the match in Star Sports official website.