After coffins, cats and Obama statues in Mars, UFO enthusiasts has something else to rejoice as a new photo sent from NASA’s curiosity rover is allegedly featuring a human like shadow.

As per alien conspirators and NASA doubters, this image features nothing but a human trying to tinker on the rover.

As per conspiracy theorists, this human might be a mechanic who has been deployed in Mars to do the maintenance of the Curiosity Rover. 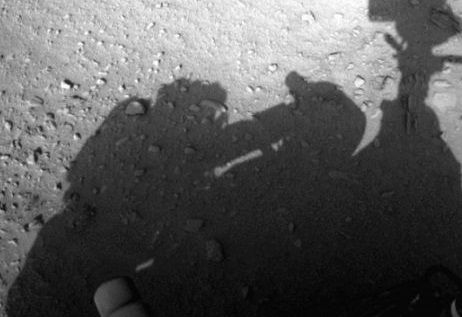 Some other theorists believe that the Curiosity Rover is not in Mars but on an isolated location in the Earth. People who believe in Aliens claims that the shadow seen in the picture of is of an alien and not of a human.

The shadow looks clearly humanoid, but some experts states that it is the shadow of Curiosity Rover itself. A weird angle of the snap made it humanoid, and there is nothing to be suspicious about it.

As per experts, this is nothing but the trick of our eyes to imagine things which we have seen in the past.

Many internet conspiracy experts believe that NASA would have lied things to the general public for one reason or the other.

As per them, NASA might have sent humans to the Mars, and this news might have kept in a very confidential manner.

Some other crazy people claim that NASA might have formed an alliance with the Martians. As a result of their friendship, a martian might be probably checking the proper functioning of Rover.

Speculations and wild imaginations about this photo is now the hottest talking topic in various social media sites, but the truth still remain unclear.