After almost a month since its announcement, Microsoft has finally decided to put up the Lumia 435 smartphone for sale in the Indian market.

The device is now available on their online store for a pricing of under Rs 6000. The entry level smartphone, running Windows 8.1 OS, was announced in mid-January. 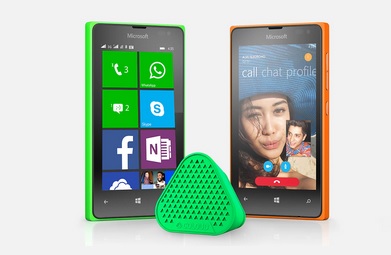 With a host of basic features, the device would be aiming to target customers who would want new entry level devices, as well as the ones in search for a back-up smartphone.

The dual-SIM phone packs a 4-inch display that boasts a resolution of 480 x 800 pixels. A dual-core Snapdragon processor clocked at 1.2 GHz forms the heart of the device, along with RAM offering of 1 GB.

With an optimized performance from the OS, the specs can be assured to bring out a decent performance for its price range.

Storage demands are met by the on-board 8 GB memory, which can also be expanded to up to 128 GB via micro-SD.

Microsoft however hasn’t leveled up with the rest of the entry-level rivals with its camera specs. A 2MP primary cam is what it offers, which is accompanied by a 0.3 MP front cam supporting video calls.

Although being announced with four color variants, Microsoft is currently offering only two color variants of Lumia 435; the black variant and the white  variant.

The Green and orange variant are also listed on the store, and is awaiting a launch soon. The devices also have tie-ups with Tata Docomo and Airtel, offering service provider offers for purchases made before March 31st.

Microsoft to give Windows license free for Smartphones

Massive price-cuts for iPhone 6 and iPhone 6 Plus devices

New Nokia Lumia 1520 price in India, review and features
About Sanjeev Ramachandran 147 Articles
Sanjeev Ramachandran has found ultimate joy all through his 23-year-long journalism career by writing for national and international newspapers, websites and blogs. From technology to politics to sports to entertainment, he has been able to express ideas and pen opinion pieces on whatever triggers his interest. Currently at the helm of his own content and public relations company, called Siyahi – The Content & PR People, he makes sure that he doesn’t always let administrative tasks take over his writing space.