It is that nostalgia of the 1990’s which made us wait for the much awaited fourth installment of ‘Jurassic Park’ franchisee which is named ”Jurassic World”.

The movie which is directed by Colin Treverrow hit the theaters in India on June 11, 2015.

The film has reportedly received huge initial pull in theaters all across the country, and it is considered to be much more than that of the recently released ”Fast and Furious 7”.

The Box Office Collections of ”Jurassic World” is expected to be huge when it comes to a Hollywood movie. Most of the multiplexes in metropolitan cities like Bangalore, Chennai and Mumbai witnessed a theater status of 100%. 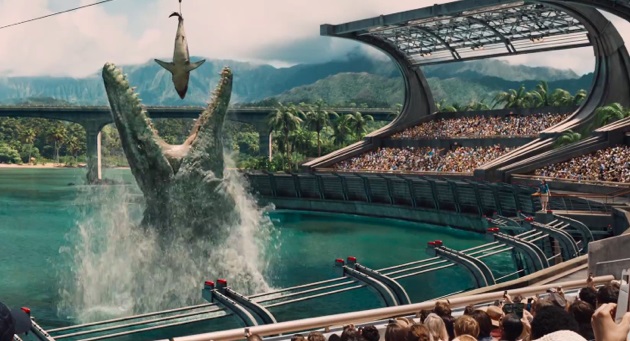 Jurassic World will surely hit the Bull’s Eye in the Indian Box Office because no other big movies are hitting the theaters in the country during this weekend.

The initial reviews which are coming out about the movie are highly positive in nature. The new movie has reportedly succeeded in satisfying the audience, and the director has successfully taken his audience to a new adventurous ride to the legendary ‘Jurassic World’.

The movie showcases a fun filled adventurous story in the backdrop of ‘Jurassic World’, One day, due to a small human error, the gigantic and Intelligent dinosaur which has been developed with genetic modification escapes and it creates much havoc in the park. It creates a killing spree, and the efforts to lock it forms the major part of the movie.

Indian actor Irrfan Khan has a crucial and pretty big role in the movie. He enacts the character of Simon Masrani, the CEO of Jurassic World.

The movie’s Box Office aspirations are quite high, and in all probabilities, it will make it big in the Indian theaters.

The movie may collect somewhere in between 15-18 Crore INR from the theaters at the end of the first weekend, and this is something whooping for an English movie. More box office updates of this movie will be updated here. Stay Tuned….

Telugu Movie ‘Oopiri’ Review and Box-Office Collections Report
About Moiz Ur Rehman 70 Articles
Moiz resides in Rawalpindi, Pakistan, and is very passionate about Pakistan Cricket. He loves writing cricket match previews, players' news, and live matches. He is a very good all-rounder himself.