It took more than 800,000 volunteers to shatter a previous world record set by Pakistan in 2013, by planting 50 million trees in 24 hours.

The previous record was a staggering 850,000. But leave it to the Indians to dwarf anything when it comes to numbers.

A group of volunteers from Uttar Pradesh worked for 24 hours straight in the state to accomplish this task. Eighty different types of trees were planted along the roads, railway setups and in public areas. 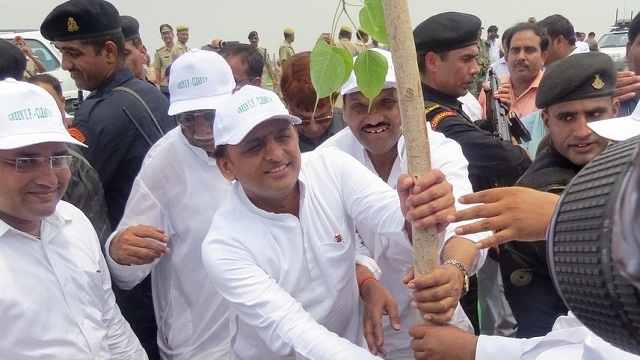 This is an effort by the country to mitigate the effects of global warming. This frenzy is the beginning of an effort to restore forests that India agreed to during the 2015 Paris Climate Talks.

During the talks, India committed to reforest 12 percent of its land by 2030. This would cost an estimated $6.2 billion.

UP Chief Minister Akhilesh Yadav spoke to the volunteers before the planting and said that it is about time that everyone realizes that serious measures need to be taken to reduce carbon footprints, and the state is the first to take a major step in this regard.

Considering that there is a 60 percent mortality rate of saplings, India is still way ahead of the previous record of 847,275 trees planted out of the water by Pakistan back in 2013.

Edward Parson, environmental law professor at the University of CA said that this is a small contribution to the nation, considering the greenhouse emissions, but this is a move in the right direction, and it looks promising.

The collective tree-planting serves as an inspiration to the neighboring countries. This could lead to a land globally renowned haven for wildlife. Besides this efforts need to be made to regenerate degraded forests by planting new trees in those areas.
Source:

Is the black fungus a new epidemic in India
About Nitish shaw 60 Articles
An aspiring novelist and a random blogger, Nitish is also a porky-mouthed banter specialist when it comes to football (soccer), films, TV Series, History and socio-economic issues. He travels, indulges in music and plays outdoor sports to get his creative juices flowing. “There’s the scarlet thread of murder running through the colorless skein of life, and our duty is to unravel it, and isolate it, and expose every inch of it.”- Quote this, and you will be his favorite person for at least as long as the two of you can hold up the conversation.