It was a phenomenal beginning of the One-Day series between India and Australia, at the MA Chidambaram Stadium, Chennai, as the hosts who faced a colossal fall in the initial phase of the innings, came back in spanking passion with the help of middle-order, thereby marking a thrilling 26 run win over the Kangaroos. Now, the ‘Men In Blue’ has proved their mettle once again by defeating Australia in the second match too which was played on September 21, 2017, at the Eden Gardens, Kolkata. 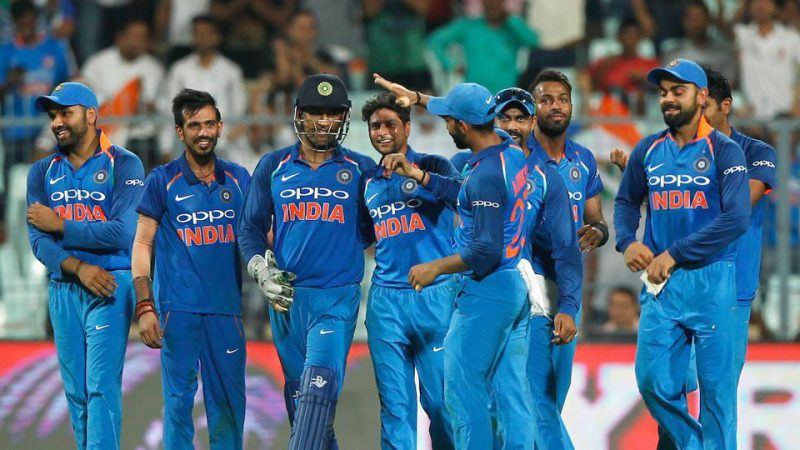 Exclusive News
India who batted first scored 252 runs, but Australia ended their chase 50 runs short of the target. It was Indian skipper Virat Kohli (92) who led the team from the front, and he was given adequate support by Ajinkya Rahane (55). Chasing an assailable target, Australia lost quick wickets initially, and it was then Steven Smith (59) and Marcus Stoinis (62) tried to save the sinking ship. But the dismissal of Steven Smith shattered the Australian dreams, and finally India marked a 50 run win over the Aussies.
First ODI report
Indian Captain Virat Kohli is pretty happy about the way in which his team performed in the match at Chennai. Even after losing five wickets when the score was just 87, the team bounced back strongly and reached a competitive total of 281. It was former Indian skipper Mahendra Singh Dhoni (79) and aspiring all-rounder Hardik Pandya (83) who laid the winning platform for India. While playing the second game, Virat Kohli will stick to the same eleven which played the previous game, as he will not take the risk to shuffle the winning combination. Considering the recent form, Hardik Pandya may be lifted up in the batting order, and he may bat in number four position in the place of Manish Pandey. The young all-rounder proved his mettle as a bowler too by picking two crucial Australian wickets in the previous game.
On the other hand, the Aussies had a nightmarish game in Chennai, as none of their batsmen except Glenn Maxwell succeeded in playing as per the pitch conditions. David Warner who got a brilliant start scored 25 runs, but he failed to keep up the momentum. It was James Faulkner who put up a decent fight in the tail end, but his one-man show failed to save the sinking Aussie ship. Hilton Cartwright who opened the Australian innings was dismissed for just one run in the previous game, and this may compel Steven Smith to include Aaron Finch in the playing eleven. Nathan Coulter-Nile will lead the bowling attack of the Aussie side, and he will be given support by Pat Cummins, James Faulkner, and Marcus Stoinis.
When is the third game?
The third game will be played at the Holkar Stadium, Indore on September 24, 2017. India will be eyeing to win this match, as it will help them to seal the series.
Live Telecast Information
Star Sports 1 is broadcasting this series in India with both English and Hindi streams. For the live streaming, visit Hotstar or the official website of Star Sports.
Sky Sports and Willow TV are telecasting this game in the US and UK respectively.

Michael Jordan cheers as Federer wins first round in US Open

ISL Live Streaming and highlights: Chennaiyins FC vs Atletico de Kolkata
About Nirmal Narayanan 186 Articles
A journalist with over six years of experience in Digital Media specialized in writing stories on science and entertainment. A post-graduate in English Literature, I spend my free time researching paranormal incidents and UFO sightings that happen all across the globe