By Aakash Ghosh
2576 Views
Posted In
India
Tagged as
Related

2 more people test positive in Hubli, one in Keshwapur

A statue of Vladimir Lenin was destroyed in Belonia in South Tripura due to a mob violence that was unleashed by miscreants. It happened in the aftermath of the declaration of results of the assembly polls in the state. It had been ruled by Communist Party of India (Marxist) for 25 years and has now been taken over by the Bharatiya Janata Party.

It was a remarkable victory for the BJP because they had routed the CPM which had never expected to be defeated. This victory could be attributed to the aggressive campaign of the BJP coupled with the complacency of the ruling CPM.

Hindustan Times reports that, in view of the unrest, Section 144 has been imposed and the police have been taking necessary action. BJP has denied any involvement in this affair. 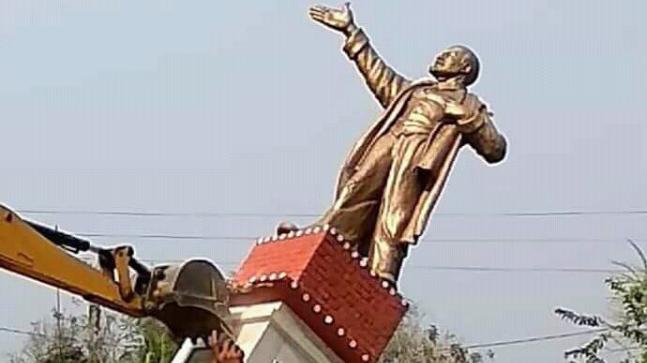 Union home minister Rajnath Singh has spoken to Governor Tathagata Roy and director general of police to ensure peace in the state. The Lenin statue was razed to the ground by a bulldozer, and the police have arrested the driver and seized the vehicle.

According to police sources, trouble broke out when BJP had taken out a victory procession, and the miscreants directed the bulldozer to the statue. CPM and BJP have blamed each other for the violence.

BJP state vice president Subal Bhowmik has revealed that some of the party activists have been injured. Similarly, CPM state secretary Bijan Dhar has also said many of its party workers and supporters were injured in several incidents of violence and its party offices were also not spared.

The swearing in of the new BJP government in Tripura is expected to be held on March 8.