Japanese car maker, Honda showcased the fourth generation sedan of Honda City in Delhi. Since the news of the new generation car emerged, it created a lot of hype and speculation amongst car lovers in the country. 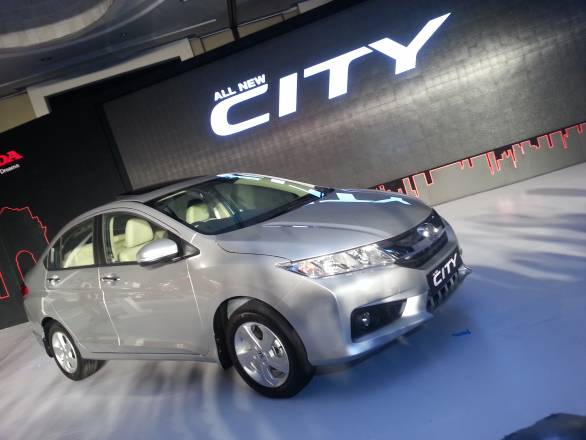 The new sedan will be launched in January, 2014 and will mark the introduction of 1.5 i-DTEC diesel engine in the City range which will also be available in 1.5 litre i-VTEC petrol engine.

Honda City has sold over 4.3 lakh units since its launch in 1998 and has been dominating the premium mid-sized sedan car range in India.

However, the car maker has been facing competition from diesel powered competitors making it imminent to introduce a diesel version.

The diesel engine made its Indian debut in the Honda Amaze. The diesel version of Honda City is expected to do really well in the market. Honda Company is targeting over 1.5 million units for the new City.

The new City now measures 1495 mm in height giving it a longer wheelbase leading to a lot of space inside giving an exceptional seating space for five.

The car has plethora of goodies like a start/stop button, A/C controls with touchscreen, rear view camera, steering mounted controls and entertainment system with eight speakers.

Pre-booking of the new model has already begun and pricing of the car will only be known at the time of its market launch.