India takes on T20 World runners-up New Zealand in Jaipur on Wednesday. This match is after the world cup.

New Zealand won the toss and chose to bat first

Follow Ind vs NZ live scores and commentary on Cricinfo

Pakistan, England, Scotland, and Srilanka won all three of the matches and are topping their respective groups.

India lost to Pakistan in their opener and will look to open their account with a win today. 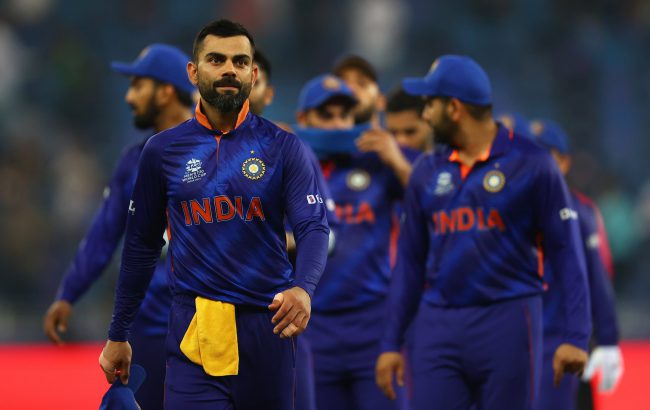 Indian opener Rohit Sharma’s form is a big concern as he has not been able to get along. The openers’ form and the platform they create in the initial stage of the match set the path for a changeable total.

India lost a chance to consolidate in the early stage of the game against Pakistan because the openers could not give them a good start. Hopefully, in the remaining matches, the Indian batsmen will propel.

On Friday, Afghanistan almost pulled off a victory against Pakistan on the baffling trend of ‘bowl first, win the match’ by bating in an evening contest in Dubai.

New Zealand is a strong team against any contender, be it Pakistan or England, or Australia. They have always performed better than anyone in the league games of World Cups.

Viewers in India can watch the match live on the Star Sports channel with English and Hindi commentary. The live streaming is available on Hotstar.com.

Watch the Ind vs NZ T20 live on Hotstar.com

Indian skipper Virat Kohli addresses the press conference ahead of the match against the Kiwis.

Teams batting second have won 14 of the 18 T20s played in Dubai this year. So the captain winning the toss is expected to opt to bowl.

In another game today, Afghanisthan will take on Namibia in Abu Dhabi.

PTV Sports live streaming Pakistan vs India T20 World Cup 2021 match Highlights video
About Aakash Ghosh 52 Articles
Akash is a cricket player himself and loves to write reviews of the matches. He is also a Freelance Text Commentator on various cricket news websites. Akash can be reached at Aakash@panasiabiz.com.