Over the weekend, many celebrities attended the 10th Annual Los Angeles County Museum of Art (LACMA) and Film Gala, including actor Leonardo DiCaprio, Jeff Bezos with his girlfriend Lauren Sanchez.

Amazon billionaire Jeff Bezos taunted Hollywood actor Leonardo DiCaprio Monday on Twitter after a video surfaced of his girlfriend, Lauren Sanchez, ogling and getting close at the actor at the event.

“Leo, come over here. I want to show you something….” Jeff Bezos posted Monday on Twitter, with a picture of Bezos bending over a signboard that read, “DANGER! STEEP CLIFF FATAL DROP.”

Leo, come over here, I want to show you something… @LeoDiCaprio https://t.co/Gt2v9JZTNz pic.twitter.com/KqGLB839NI

Bezos’ tweet reply came in acknowledgment to a video shared by Barstool Sports that revealed Bezos and his girlfriend, Lauren Sanchez speaking with DiCaprio at the LACMA Gala in Los Angeles Saturday.

So we see Leonardo DiCaprio is trending 👀 Here's our original video from @marcmalkin of DiCaprio chatting with Jeff Bezos and his girlfriend Lauren Sanchez at the LACMA Art + Film Gala https://t.co/TpKZZjUS3Y pic.twitter.com/s3nkA6rKrk

Leonardo Dicaprio met Jeff Bezos and his new girlfriend at the Art Gala in LA.

In the video, Sanchez appears fixated on DiCaprio as he briefly speaks to her and her boyfriend Jeff.

“Leo is Mr. Steal Yo Girl,” Barstool captioned the clip, which was uploaded initially by Variety’s Marc Malkin to his Twitter handle.

Fans started mocking Jeff, worth an estimated $200B, on social media.

“Jeff Bezos’ girlfriend looks at Leo the way Jeff looks at your small business.” replied one Twitter user to the video.

Find someone who looks at you the way Jeff bezos’ girlfriend looks at Leonardo Di Caprio, another user tweeted.

“The one person Jeff Bezos follows on Twitter is his ex-wife and she doesn’t follow him back. And now his new girlfriend is looking at Leonardo DiCaprio like this.” Another tweeted! 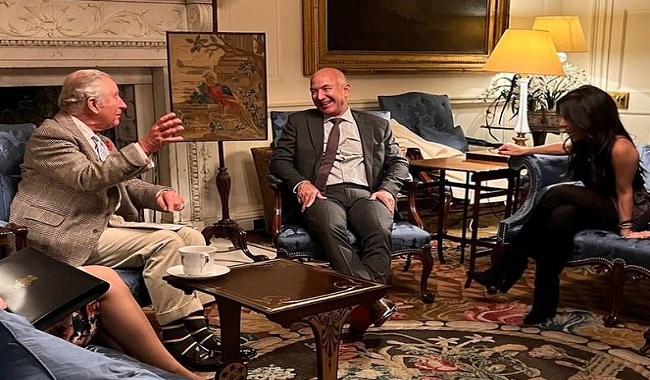 On November 1, 2021, Jeff Bezos and girlfriend Lauren Sanchez shuttled by a private plane to talk climate change with Prince Charles on the sidelines of COP26. Before attending the Prince, Bezos and 50 other guests flew choppers to Bill Gates’ superyacht birthday gathering.

‘I’ Movie Review: Will Vikram’s Avatar Shudder The Box-Office ?

Aamir Khan To Play A Wrestler In His Next Movie ‘Dangal’
About S Ranjita 171 Articles
Ranjita is a seasoned writer on a variety of topics. She has been writing for 8 years now on various international publications. Entertainment and current news topics are her favorite. She can be reached at Ranjita@panasiabiz.com