Narendra Modi said at an election rally in Bundelkhand supporting Uma Bharthi yesterday that Rahul Gandhi’s allegations against him were comical. 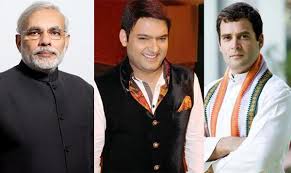 Addressing a public meeting in favor of the BJP leader Uma Bharti, Modi targeted Prime Minister Manmohan Singh saying that the PM can’t see the corruption in his government and but only the “mother-son duo” (Sonia Gandhi and Rahul) were visible to him.

Modi countered Rahul Gandhi’s statement at a rally in Gujarat that there are 27,000 crore vacant posts in the state saying that that the Gandhi scion forgot to realize that India’s population is only 125 crore.

Modi felt that comedian Kapil Sharma may be closing his TV show in few days as Rahul Gandhi’s videos can be shown by TV people for entertainment.

Mr Modi attacking SP government saying that the number of fire-arm licenses in Uttar Pradesh was higher than number of families and the importance of the election commission will be proven only when it ensures safe polling for the people being terrorized by parties using guns.

Uma Bharti criticized people who leaked her old video in which she described Mr Modi as an agent of destruction. The BJP’s candidate from the constituency said that she has great regard and respect for the Mr Modi as she was impressed by him after she had travelled through Gujarat and saw the development there.

Ms Bharti wanted to ask those who label her as an outsider that where is Sonia Gandhi from. If they can accept her why not a daughter of Lalitpur.

Rahul Gandhi should apologise for his remarks on RSS or face trail: Apex Court

Narendra Modi to be India’s next Prime Minister: US President Obama calls up to congratulate