The Ambani clan is one of the richest families in Asia. Despite so much wealth, there is one thing that they always believe in, and that is to stay grounded. When Dhirubhai Ambani had ruled the business world, it was his wife, Kokilaben Ambani, who stood like a pillar of strength for him through all the ups and downs of their life, and she made sure that despite achieving great heights in life, her children stay humble.

While scrolling through our social media feed, we stumbled upon an unseen video of Nita Ambani playing dandiya with her brother-in-law, Anil Ambani. The throwback video was from Isha Ambani and Anand Piramal’s pre-wedding festivities, where Nita and Anil could be seen dancing and enjoying as they gracefully played dandiya. The video was indeed adorable as we got a glimpse of Nita and Anil’s bhabhi-devar bond.

Back in 2019, Anil Ambani was given a deadline to pay his dues of around Rs 460 crores to RCom’s operational creditor, Ericsson. It was then his brother, Mukesh Ambani, who had come forward to help him. Mukesh had paid Anil’s dues from his personal wealth, and Anil was touched by this gesture of his brother. In a statement from Reliance Communications, Anil had said:

“My sincere and heartfelt thanks to my respected elder brother, Mukesh, and Nita, for standing by me during these trying times, and demonstrating the importance of staying true to our strong family values by extending this timely support. I and my family are grateful we have moved beyond the past, and are deeply grateful and touched with this gesture.” Anil Ambani’s wife, Tina is quite active on social media and never misses an opportunity to pen her feelings for her loved ones. To mark her jeth and jethani, Mukesh Ambani and Nita Ambani’s wedding anniversary, on March 8, 2021, Tina posted a lovely picture with the couple. In the heartfelt caption, Tina had written:

“Cheers to a couple who complement and complete each other to perfection! While you enjoy this wonderful new chapter of grandparenting, here’s wishing you a lifetime of health, happiness and togetherness. Happy anniversary Nita and Mukesh.” 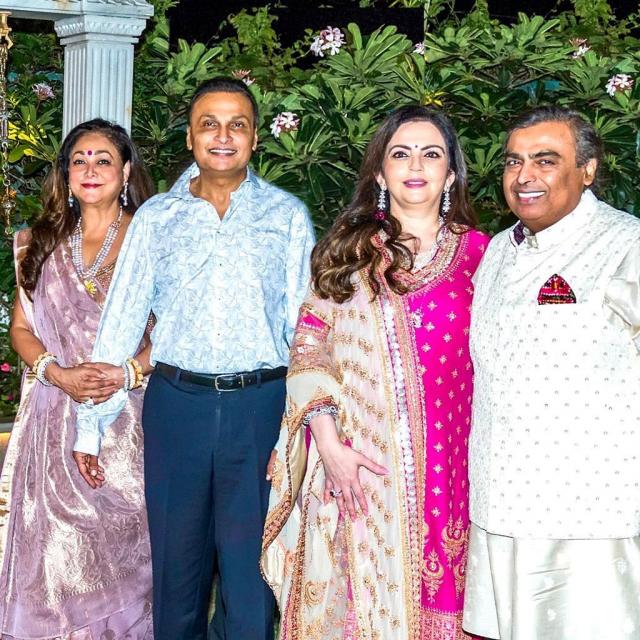 AWESOME NEWS! Now you can download BollywoodShaadis app and never miss a story. Get App

AWESOME NEWS! Now you can download BollywoodShaadis app and never miss a story. Choose your device Android or IOS (Apple)