Raj Kapoor, better known as the legendary showman of Indian cinema still lives in the heart of millions of fans and his family even after 26 years of his demise.

Yesterday was Raj Kapoor’s 90th Birthday, and the guests who flowed to the RK residence at Chembur clearly indicated his unmatchable star status even in the second decade of the 21st century. 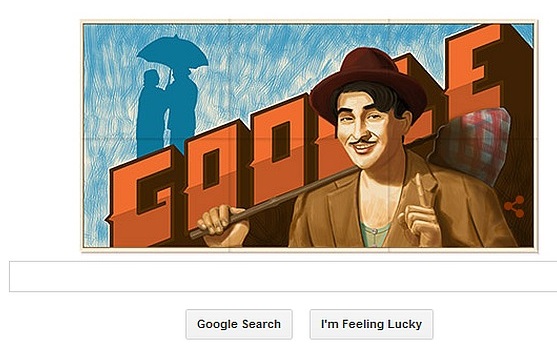 On the other hand, Search Engine giant ‘Google’ also celebrated the 90th Birthday of Raj Kapoor. They dedicated a doodle which showcased Raj Kapoor’s avatar from 1951 classic ‘Awara’. The legendary actor was seen carrying a ‘Google placard’ on his shoulder.

Renowned filmmakers, relatives and family friends visited the RK Cottage on Sunday, and they recollected their memories about Raj Kapoor.

As per reports, Mrs. Krishna Raj Kapoor had organized a splendid lunch for the guests. The absence of his son Rishi Kapoor was noted by many people. The ace actor was busy with another event which is for a good social cause.

Rishi Kapoor’s wife Neetu was expected to reach the home for lunch, but due to unknown reasons, she failed to turn up.

Later, Rishi Kapoor told that the family doesn’t celebrate any kind of Poojas on the birthday of Raj Kapoor. Instead, they will do the rituals on the death day, June 2.

Raj Kapoor began his career in 1935 with the movie, ‘Inquilab’. He was aged 11 then, and the rest is history. The man made his mark in all areas of film industry; let it be acting, producing or directing.

< Previous Article
‘Kakki Sattai’ audio songs are out; listen to the music
Next Article >
Kissing doesn’t lead to pregnancy: Diandra Soares
About the Author
Padmaja Shalgar