Cricket Australia has named Steven Smith as the deputy for Michael Clarke in Test matches, which would bring him in charge for the upcoming matches in the absence of Clarke. 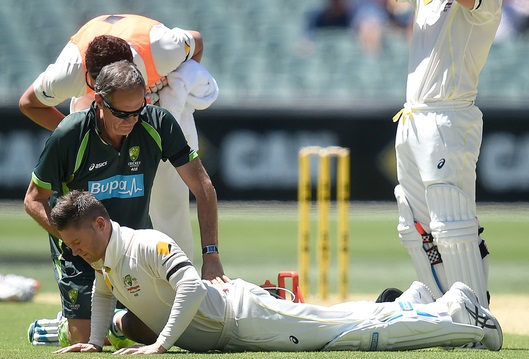 The Australian skipper was forced to leave the ground on the final day due to injury and is expected to stay off from the entire series.

Brad Haddin, who was named as stand-in captain in Adelaide in case of Michael Clarke not showing up, will be serving as the vice-captain for Steven Smith.

Despite being assigned to lead the squad in the final day, Brad Haddin would be kept away from captaincy in the remaining matches, a move that has been taken by laying foresights on the long-term future.

Michael Clarke’s cricketing future has now been brought to uncertainties with the series of injuries he has been dealing with. Appointment of Steven Smith as the new deputy does hint future plans of giving the leadership key to the 25-year-old.

Steven Smith will be making his captaincy debut at Brisbane on December 17 and will remain in that place in case Clarke fails to join the squad soon.

Steven Smith will become the 45th Australian player to lead the team in the five day format. He has never been hesitant to admit that leading the squad was indeed one of his dreams.

He has become the second youngest captain of Australia, next to Kim Hughes, and has been quoted as saying that he is looking forward to his new duty and added that he would be having the full support from Brad Haddin, his deputy.

Steven Smith rose to be a key member in the squad in recent times and has been more than impressive in the recent outings of Australia. With a career average slightly below 50, Smith has registered five centuries till date to his name from just the 23 appearances he has made wearing the white jersey.

His leadership qualities were displayed during his stint at New South Wales, where he led the squad to clinch the Sheffield Shield title in 2013. He has also led Sydney Sixers to lift the Big Bash League in 2012, by defeating Perth Scorchers in the final.