World Cup or not, when India meets Pakistan on the cricket field, it always calls for exciting times.  As the two teams face each other at the Adelaide Oval on February 15, the excitement grows manifold, simply because the occasion is one that would lead to a fight for supremacy at the global level.

As the opening encounter between the two teams happens away from the subcontinent, the excitement is much more. 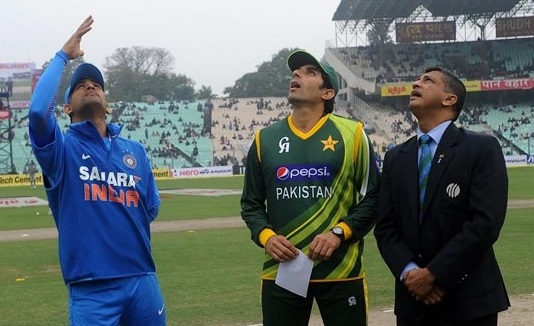 Viewers in Pakistan can watch the match live on Ten Sports and PTV Sports TV channels. In India Star Sports and DD Doordarshan will broadcast the matched.

PTV Sports in Pakistan and Star Sports in India will be live streaming the match at their respective websites.

The two skippers seem to be looking forward to the match as this encounter would help increase their morale for the subsequent matches.

While India captain M S Dhoni doesn’t want to bank on statistics – though they are clearly siding with an Indian supremacy – and play winning games from tomorrow onwards till India gets to hold the trophy, Pak skipper Misbah ul Haq says though the encounter does bring in the customary amount of pressure, he would love to enjoy the game, the atmosphere, and be positive.

For the Indian eleven, this is the ultimate test. The lien up is strong enough to decimate any attack. But then, the tri series, which happened a few days ago, saw the team succumbing under pressure. It is expected that Dhoni would want to play six batsmen and an all rounder.

That could mean that Ambati Rayudu may have stay away, and make way for either Ravindra Jadeja or Akshar Patel for the all rounder’s slot.

It wouldn’t come as a surprise if Stuart Binny also stakes a claim. However, Dhoni would love to have spinning all rounder to do the honours when the match goes on.

It is not known as yet whether Bhuwaneshwar Kumar would get to play. Mohammed Shami will ofcourse play the ace seamer’s role, and could be aided by Umesh Yadav or Mohit Sharma with the ball. The spin attack is likely to be safe in the hands of R Ashwin.

Pakistan, on the other hand, is battling injury issues. Ahmed Shehzad who hurt his elbow is fighting it out to be fit by tomorrow.

The team has also had some good news with the coming in of Nasir Jamshed in place of Mohammad Hafeez. Wicketkeeper-bat Sarfraz Ahmed could open the innings while Younis Khan and Misbah could be strong walls for India to break into. Umar Akmal, Sohaib Maqsood and Haris Sohail could complete a winning line up, and adding more meat into the Pak attack could be Shahid Afridi.

The problems persist in the bowling department. The absence of Junaid Khan, Saeed Ajmal and Hafeez could throw up hassles.  Misbah would have to bank on Afridi  and Mohammad Irfan

The match tomorrow is sure to be thriller. We need to wait and see if the teams would entertain even as they fight tooth and nail against each other, out there in the middle.

Star Sports live streaming India vs Pakistan World Cup match: Cricket live score
About Sanjeev Ramachandran 147 Articles
Sanjeev Ramachandran has found ultimate joy all through his 23-year-long journalism career by writing for national and international newspapers, websites and blogs. From technology to politics to sports to entertainment, he has been able to express ideas and pen opinion pieces on whatever triggers his interest. Currently at the helm of his own content and public relations company, called Siyahi – The Content & PR People, he makes sure that he doesn’t always let administrative tasks take over his writing space.