Tamil actor Santhanam was trending on Twitter and other Social media sites on Wednesday after rumors spread that he had secretly tied the knot with his “Vallavanukku Pullum Aayudham” co-star Ashna Zaveri.

But the actor later clarified and rubbished rumors and said it was just a coincidence that the both of them came to the Tirupati temple at the same time.

He said the actress had come along with her parents.

Contradicting his statement, the below picture shows Ashna Zaveri and Santhanam together at the premises of the Lord Sri Venkateshwara temple in Tirupathi. 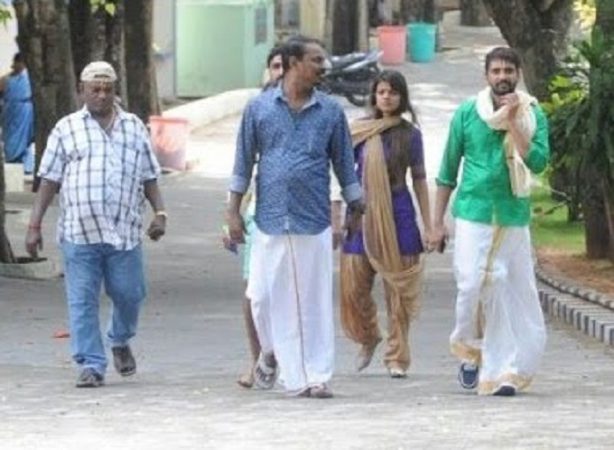 “As a routine, I visited Tirupati before the shoot of my next film. When Ashna also visited the place, we were somehow photographed together.

“I was requested for an interview and since the purpose of the visit was different, I didn’t want to do it.

“Media has come up with a baseless rumour quoting that Ashna and I were there to get married. This is utter-rubbish”.

Ashna has acted in lead role in two Tamil films “Vallavanukku Pullum Aayudham” and “Inimey Ippadithan”, both of them also had Shantanam as the lead actor.

Review: ‘300: Rise Of An Empire’ is not Perfect, But Stands As Eva Green Creates The Magic!