New Zealand wins the toss and they will bat first.

The Kiwis made four touch changes to their playing eleven.

India playing XI is the same that won the Asia Cup in Dhaka.

Indian team will be in a dilemma as they are gearing up for the inaugural match of the ICC T20 World Cup against New Zealand on March 15, 2015, and the reason for this confusion is nothing but the presence of two top rated pace bowlers in the team squad.

Ashish Nehra and Mohammed Shami are competing hard to find a place in the playing XI, and it will be a difficult call for Dhoni to pick the one for this match.

VCA Stadium Nagpur is known for its batting friendly surface, and from 07.00 PM today, we can witness some high octane sixes lightning and boundary tornadoes. 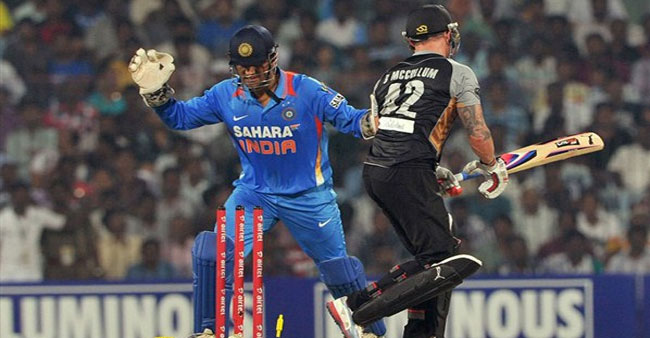 Stay Tuned to Star Sports to watch the live telecast of the match. If you are residing in the United Kingdom, tune your TV to Sky Sports.

New Zealand will be missing the service of retired legend Brendon McCullum as he is the one who is capable of setting the Indian pitches on fire.

Colin Munro and Kane Williamson will be in charge of the New Zealand batting line-up in the absence of Brendon McCullum.

Colin Munro is as dangerous as Brendon McCullum, as he has hit the maximum number of sixes in a first-class innings, and he also holds the record of hitting New Zealand’s fastest fifty.

New Zealand will have an increased morale in this match as their most experienced batsman Ross Taylor will be returning to the playing eleven after recovering from injury.

On the other hand, the Indian team has the strongest batting lineup when compared to all other teams who are playing this tournament.

With names like, Shikhar Dhawan, Rohit Sharma, Virat Kohli, Yuvraj Singh and Suresh Raina; India has the capability to tear even the most ferocious bowling attack in the world. Jasprit Bumrah will be the trump card in the bowling lineup.

Jasprit Bumrah will be the trump card in the bowling lineup. Pitch in VCA is known for its spinner friendly nature, and sometimes, Ravichandran Ashwin will create some magic through his unexpected turns.

Ind vs SA 3rd T20: Live Cricket Score and Star Sports live streaming free
About Manoj Nair 117 Articles
For Manoj, writing has been his first hobby, and after completing his domestic duties, he has plunged into his first love, writing. He is associated with writing for different news sites, like Blasting News, PanAsiabiz, and Herbal Remedy Sites like MamaHerb.com and AOR.