Diwali 2020 has proved to be lucky for Akshay Kumar after his back to back hit films. On opening up of his new film “Ram Setu”, the actor says, “this film will keep-alive the ideals of Ram. In the cognizance of all Indians traversing a refined bridge for generations to come”. 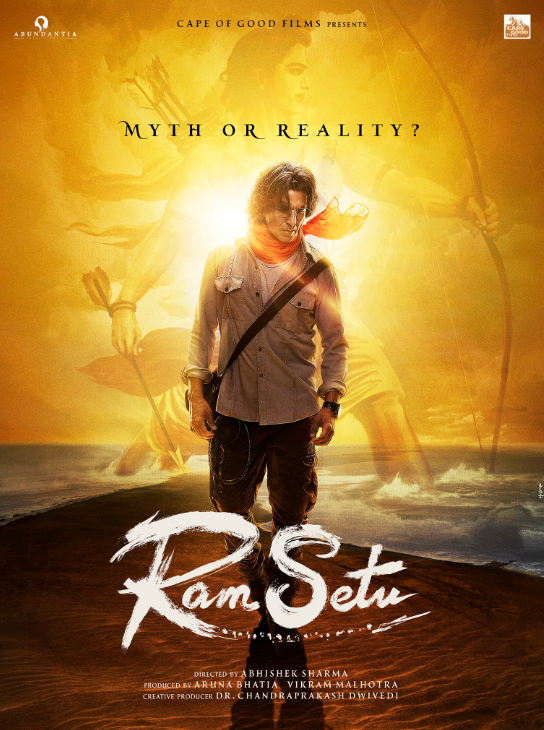 Akshay Kumar tweeted on Diwali to announce his upcoming film, “Ram Setu” by bestowing his first appraisal poster. The film-poster attributes Akshay as a traveler, in a shirt and cargo trousers with a petite bag flapping around his shoulder and hair styled, slightly longer in the film.

He also indicated another tweet about “Ram Setu” in Hindi, as well to target his other round of fans in which the poster contained a picture of Ram. Holding a bow and arrow in his hands which is more pre-eminent in the backdrop.

Secondly akshay also worte a cover story which said, “This Diwali let us endeavor to keep alive the ideals of Ram in the consciousness of all Bhartiyas by building a bridge(Setu) that will connect generations to come. Taking this mammoth task ahead, here is our humble attempt – #RamSetu. Wishing you & yours a very Happy Deepawali!”

This Deepawali,let us endeavor to keep alive the ideals of Ram in the consciousness of all Bharatiyas by building a bridge(setu) that will connect generations to come.
Taking this mammoth task ahead,here is our humble attempt – #RamSetu
Wishing you & yours a very Happy Deepawali! pic.twitter.com/ZQ2VKWJ1xU

After releasing his recent horror comedy film “Laxmi”. Became his first Digital release, recording the biggest opening of his career. The film attributed him to the unusual character of a man possessed by the spirit of a Transgender. The actor blotched a fierce look, draped in a saree, with big red bindi, and long locks tied in a pony. All though this may be true that the film was earlier entitled “Laxmi Bomb”, which had to be renamed as “Laxmi” due to certain scruples from several groups

Akshay Kumar, on discerning to release his forthcoming films like “Bellbottom”; “Prithviraj” a periodic drama. Likewise, he will then exhibit an action-comedy film titled “Bachan Pandey” in Jaisalmer in January 2021. Certainly, he was also readying the release of Rohit Shetty’s “Sooryavanshi” film, which certainly had to be postponed due to the corona pandemic. Will now be released in 2021, says Hindustan Times.

Rani Mukerji is Pregnant with her Due Date in January
About Aishwarya Ramaning 20 Articles
Aishwarya Ramaning, a woman who stands strong, when it comes to the woman's right. She is an autodidactic person, who chooses not to be a silent follower, but an egalitarian from the heart who has sustained the cold winds in rooting her career. Believes a pen could succeed, where a stick or a stomp might have failed. Having a soul of solicitude and a Humanitarian moralist is keenly looking forward to becoming an adept news writer and a legal practitioner.