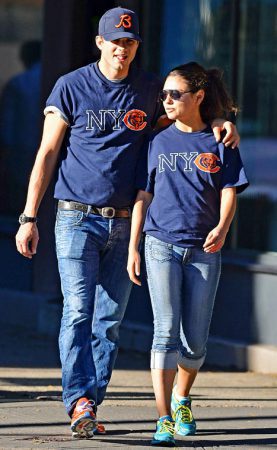 Rumours suggest that “Jobs” star, Ashton Kutcher will be free to propose to his current girlfriend, Mila Kunis next week.

Ashton and Mila have been dating for over a year and the actor is waiting for his divorce settlement with actress Demi Moore.

For the past two years, Ashton, 35, has been in divorce negotiations with his former wife, Demi Moore, 50, who is worth an estimated $150 million.

The divorce is about to become official as the ex-couple have finally agreed to a settlement after the lengthy process.

Despite her own vast wealth, Demi will receive a part of Ashton’s multi-million dollar fortune and some shares in some of his technology start-ups.

On professional front the actor is going great too. Recently world’s biggest PC maker, Lenovo announced that they have hired Kutcher as a “product engineer” for the new Yoga tablet computer.

The “Two and a Half Men” star will not only serve as the celebrity face of the Yoga tablet but he may have something more to offer to the company.

Even though he has no formal background in engineering, Kutcher is known to be tech savvy as he had made investments in tech startup companies like Skype, AirBNB and Foursquare. His own venture capital firm, A-Grade Investments, has active investments worth $66 million.

Katrina Kaif say’s Pakistan Will Have Problems With ‘Phantom’

More security for Shahrukh Khan after his remark on ‘Intolerance’

Chandigarh Bans Girls in Short Skirts in Nightclubs and Discotheques