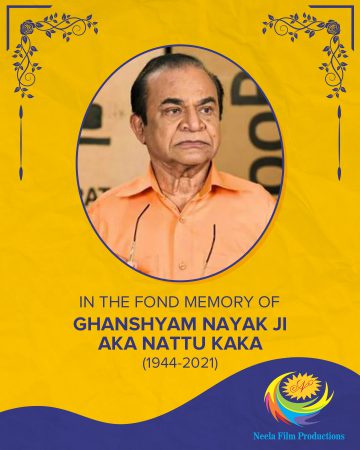 The late actor, aged 77, was battling cancer and lost his life on Sunday evening. He revealed his ailment months after he underwent his first surgery last year after eight knots were found in his neck.

He came to know about this disease when he spotted some scars on his neck. After the scans, he came to know about his ailment, and he was undergoing chemotherapy. At that time, he had informed his fans that he was recovering well and he would resume the shoot soon.

It pains us to inform you all with a heavy heart about the demise of Mr Ghanshyam Nayak ji who played the role of Nattu Kaka in #TMKOC.
Ghanshyam ji has been a invaluable member of our TMKOC family for all the 13 years of our time.

In May, he dismissed several rumors regarding his financial crisis due to not being able to shoot the show’s episodes, Taarak Mehta Ka Ooltah Chashmah. He had missed the shooting due to the corona safety protocols taken into consideration by the team. He cleared all the rumors saying that he was not unemployed.

In June, he said he is undergoing the cure and is impatient to come back on the show. He just needed to experience the chemotherapy once a month, and on the doctor’s advice, he will soon resume the work. He said that he wants to spread positivity and make people laugh through his work. He wished that the makers would quickly call him for regular shooting, as he did not want to stop working until his last breath.

He had been working in the film and TV industry since 1960 as a child artist, but he struggled financially due to less working wages in the early days of his career. But on joining the show Taarak Mehta Ka Ooltah Chashmah, he became financially stable.

Bhupendra Patel, the Chief Minister of Gujarat, also took this news to his Twitter handle, expressing his grief for the loss of such a talented actor.