India and Sri Lanka square against each other yet again for the swiftly arranged five ODI match Celkon series and things look quite similar to that of last time when these two played in a series of same sponsorship. 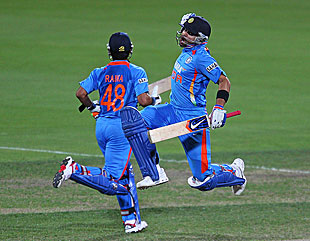 Skipper MS Dhoni has been rested for the first three ODIs and Virat Kohli will lead the men in blue to lock horn with a rather experienced, yet unprepared Sri Lankan squad.

India would be having the least of worries when getting on turf at Cuttack for the first ODI tomorrow.

Backed by the home soil advantage, the platform is for some young guns to hit an impact on the minds of selectors before they scribble the final 15 for the World Cup.

Absence of MS Dhoni, Rohit Sharma, Bhuvneswar Kumar and Mohammad Shami will have its replacement by some promising talents.

The match will telecasted live on multiple channels in different countries as below.

Star Sports will also be live streaming the  match live on its official website. Watch the match live online here.

Ravichandran Ashwin also makes his return to add some experience to the bowling front after being rested for the series against West Indies. It would also not be surprising if all rounder Akshar Patil makes it to the squad who had some impressive spells with the ball.

Sri Lanka would be bolstering an experienced squad when having a comparison, with the likes of Kumar Sangakkara, Mahela Jayawardene, Tillakaratne Dilshan and skipper Angelo Mathews.  Yet they have a dent in the bowling attack with the absence of Lasith Malinga and left-armer Rangana Herath.

The Sri Lankan skipper has also expressed concerns in lack of preparation for the series, but at the same time would be keen to build a winning momentum ahead of their home series against England. The entire squad will only be urging for a reset after the warm-up game in which they failed to make an impact.

The opening match at Barabati stadium in Cuttack will begin at 1:30 PM tomorrow and can be billed to create a flurry of runs on the scorecards from either side. It can be assumed for the skippers to opt for batting first, provided the dew factor rising in the night times.