As the second day got wound up in Brisbane, Australia has carried their innings with a well paced response keeping the scores at 221/4. Steven Smith, making his captaincy debut, stood the crease at stumps with 65 runs, sending out notions of witnessing a captain’s knock. 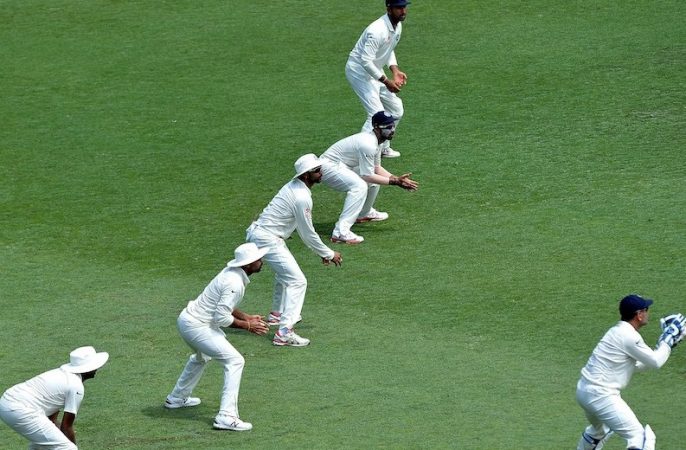 Trailing the opponent score by 408 runs, Australians kept the innings at a good pace though wickets fell at regular intervals. David Warner, the dual-ton scorer in Adelaide, hiked the Australian pace with some resounding shots.

But the left-hander failed to put up yet another massive score against his name as he fell early with his score reaching at 29, from 28 balls, which was also the initial breakthrough for the visiting team.

The live streaming of the match can be seen online on Star Sports website here.

Umesh Yadav opened the account for India and was the pick of the Indian bowlers with a spell of 3/48, which included the wickets of Chris Rodgers (55) and Shaun Marsh (32).

The other wicket to fall was pocketed by Ravichandra Ashwin, who sent back Shane Watson for an individual score of 25.

Earlier, the Indian innings ended at 408 after the innings resumed at 311/4. Josh Hazlewood, the debutant in the Australian squad, kept the Indian innings under control by clinching the price wicket of Ajinkya Rahane (81), alongside wickets of Ashwin (35) and skipper MS Dhoni (33).

He finished his debutant spell with an impressive figure of 5/64. Nathan Lyon picked up 3 wickets while Mitchell Marsh and Shane Watson picked one each to bring the halt to the Indian innings.

Australia will be resuming the innings tomorrow with Steven Smith and Mitchell Marsh (7*) as the second Test of the four match series promises to be eventful.